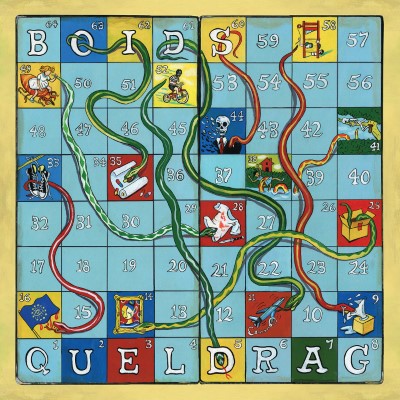 Don’t let the title mislead you. This latest release from BOIDS is certainly no drag—in fact, it’s quite a lot of fun!

Quel Drag is a vivacious showcase of the Montréal trio’s take on punk of decades past. It’s generally reminiscent of the pop-leaning kind of the 1990s, although it also touches upon the 80s hardcore variety, which you can hear especially in many of the guitar riffs. Think earlier Green Day with some Dead Kennedys mixed in, and that might give you an idea of BOIDS’ overall style on this album. Echoes of both artists are apparent across all tracks, beginning prominently with the rhythmic opener, “Eurovision.” The influence of other punk icons can occasionally be noted as well, including a blatant Ramones reference in “Jet Blue.” And BOIDS absolutely does justice to the genre as a whole.

But enjoy these songs while they last. Most are short—with 11 tracks, the album just barely clocks in at half-an-hour. What they lack in length, however, they sure make up for in energy. There isn’t a song on the entire album that a person couldn’t easily dance or mosh along to. Without exception they are catchy, and predominantly lively in tone. The chorus of “Stains,” for example, is the kind of upbeat hook that is likely to make any listener smile. You might even feel compelled to sing along.

Speaking of which, the lyrics can at times be somewhat silly (e.g., “the kinkiest way to clean my jeans”), though at others are suggestive of social commentary (e.g., “reptilian dinner party intellectuals”). Most often, they fall somewhere in between. You get the impression that the band has put a lot of thought into their writing, but without taking themselves too seriously. The overarching result is music that is lighthearted while still having substance. It’s nostalgic, yet feels fresh. It’s an all-around good time.