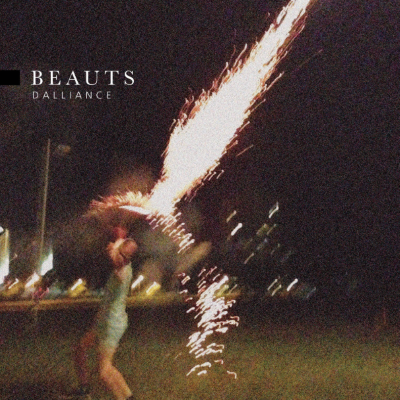 In their relatively fresh existence, Halifax-based Beauts have already garnered some critical acclaim with a handful of EPs, and their newest output continues to justify such praise. Dalliance, their first full-length album, proves that contrary to their somewhat self-deprecatory online biography, the band has both gusto and chops.

Appropriate of its late February release, Dalliance is like the warming hints of an imminent spring settling upon a frozen landscape. Just take the opening track, “The City Loves Me.” It comes on serenely with ambient noise before launching into crisp drums, tinkling guitar notes, and a warm bassline overlain with soft vocals. All of this evokes an atmosphere befitting of a transition between seasons, which is characteristic of the album as a whole. And whenever a heavily distorted riff cuts into the mix, it’s as though the point of full thaw has been reached.

It’s this frequent dichotomy between calmness and zeal that makes these songs such a delight to listen to. At one end of the spectrum, they have this largely smooth and dreamy sort of vibe, perhaps as best demonstrated by the particularly tranquil “Hurry.” But you also get the sense that at any moment such slow-burning momentum might suddenly ignite, and it regularly does, as with the anticipatory build-up leading to the rocking climax of “Shut In.” A similar balance of opposing yet complementary tones extends to the lyrics as well. Even when singing of burning out or going through Hell, the vocals somehow maintain an uplifting air. Every aspect of the music seems so purposefully placed in this regard, not to mention beautifully produced.

It’s exciting when a band releases such a sonically well-crafted album so early in their career. It makes you wonder what they might accomplish next. This reviewer, for one, can’t wait to find out.