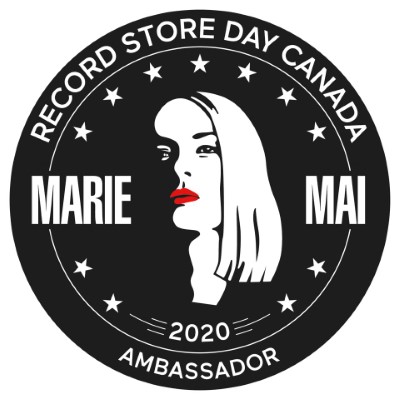 Marie-Mai has been named the Canadian ambassador of the next edition of Record Store Day, the worldwide celebration of record stores, which happens annually in April. After picking Nova Scotia rock band The Trews as ambassadors in 2019, the organizers of Record Store Day have now asked Marie-Mai to become the first female artist and first Quebec artist to assume this role. This major event that brings together independent record stores, artists, music lovers and vinyl collectors every year will hold its 13th edition on April 18, 2020.

To celebrate the occasion Marie-Mai will release a limited edition, numbered vinyl reprint of her latest album ELLE ET MOI. Pressed on superb orange vinyl the album is bound to become a collector’s item for fans of Marie-Mai. The special edition will also include a bonus song, “Coming Through Me” which is the English version of “Exister.”

“There is something intriguing and nostalgic about holding a vinyl record in your hands, placing it on the turntable, and hearing the first notes. Senses like touch and sight can also be stimulated by music. We tend to forget it nowadays. That’s what makes Record Store Day so essential. I must admit that it’s also inspiring for a francophone singer-songwriter to be asked to become the ambassador for a national celebration of music, in addition to being the first female artist to hold this title. I share this honor with all the women who turn their passion for music into the most wonderful job in the world!” says Marie-Mai.

Marie Mai is one Quebec’s biggest artists and celebrated musicians. An enormously talented singer-songwriter, Marie-Mai has dominated the Quebec music scene for more than 16 years, with over two million fans having flocked to her live shows. With six albums, five platinum certifications, six tours, 15 concerts at the Bell Center, 19 number one hits, ten Feìlix Awards, including five for Female Artist of the Year, Marie-Mai has solidified her status as a force in the music industry. As a successful songwriter in both French and English, Marie-Mai has won nine awards from SOCAN and was honored as Songwriter of the Year in 2014.