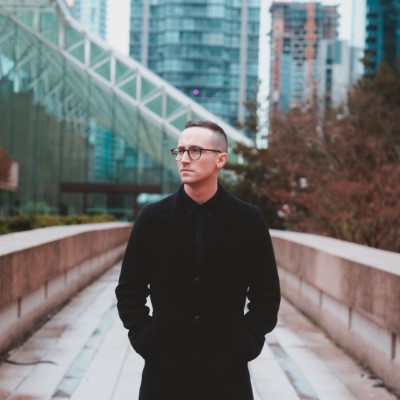 The track and short film focus on one key realization: the most important aspect of creating music, or art in general, is to create something that you enjoy first and foremost – do not worry too much about how it will be perceived by others. “Taking Steps” is MAML’s way of discovering and refining his sound. The track begins with an ambient aura that smoothly blends into heavy drums and big synths. His cinematic storytelling ties the whole project together in a euphoric and awe-inspiring manner.

Check out the film below and find out more about MAML via our Five Questions With segment.

I am an electronic music producer from Vancouver, Canada. I grew up playing guitar and singing in bands but became passionate about electronic music in university. I officially started releasing music under the moniker Maml in 2017 when I released my first 3-track EP, “Missing Universe”.

I’ve been told my music is a mix of indietronica, chillwave, and future bass. I get tons of inspiration from movies and movie soundtracks. So, typically, I’ll have some sort of visual in mind when I start writing a track. I love recording my own samples – sometimes that consists of my own (heavily manipulated) vocals, or random field recordings. I also try to sing on most of my tracks and use the guitar when it fits.

I don’t approach writing a track any specific way. Sometimes it starts with a vocal melody, a few samples, or a drum beat. Whatever feels right, to be honest. Whether it’s a pitfall to my music writing or an upside, I also don’t really follow a specific structure or formula. I mean, every song has some sort of structure to a certain extent, but similar to movie soundtracks, I think it’s neat when 3-4 minute songs have extended bridges or evolve into something totally different.

No plans for shows just yet. But I’ve been piecing my live setup together over the past year, which consists of a few midi controllers, touchpads, and electronic drums, among a few other things. It’s taken a lot of programming and mapping to be able to bring my music into a live performance setting. I don’t DJ and never really have. This will be more of a one-man-band type of thing… I guess.

Robotaki and Ekali are always popping up on my Spotify favorites playlist.

Share this:
Related ItemsBC MusicEDMfeaturedInterviewMAMLpremiereTaking StepsVancouver BC
← Previous Story Five Questions With The Highsides
Next Story → PREMIERE – Did You Die releases video for “Left Of Center”