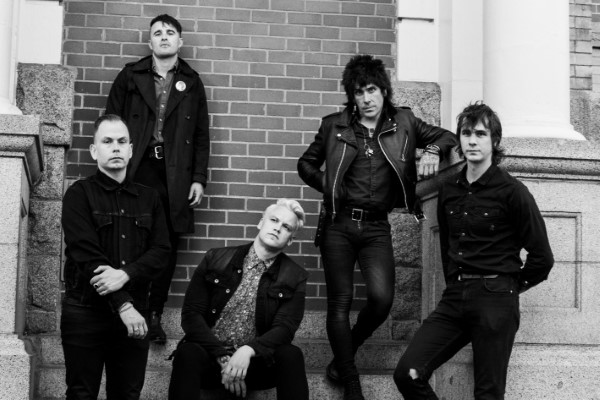 15 years after forming in Vancouver, BC, Spectres is back with their upcoming fourth album, Nostalgia. They’re heading out on a West Coast tour to celebrate the anticipated release. Check out my interview to read more about the album, the past of the band and what they have in store for the future.

Let’s start by talking about your upcoming album, Nostalgia, coming out March 13th! Tell me a bit about the album.

Nostalgia has been a work in progress for a few years now, we wrote half of it with our previous line up and then due to Tyler and Nathan leaving the band and bringing Jason and Adam on board we sort of put writing on hold while we brought them up to speed.  The two songs from our recent 7″, “Provincial Wake” and “Northern Towns” were initially supposed to be on Nostalgia but with the change in personnel, we decided to just record those two as a separate single as they were the closest to completion.  We’d played some shows with our labelmates Actors here in Vancouver and had been talking to Jason about recording together for a while and decided to go with Jacknife to record the LP.  We were working around Actors’ prolific touring schedule so we recorded Nostalgia in several sessions over the course of 2019.

This will be Spectres’ fourth album! How has the writing and recording process changed over the years?

The writing process has been pretty consistent for us during our time as a band.  Typically one of us will bring in an idea or the skeleton of a song and then we will build it up collaboratively.  Brian writes all the lyrics and tends to lock things in once we have a complete song structure.  The main thing that has changed in this regard really is just around our skill at playing the instruments! None of us are classically trained or anything, just punks who taught our selves to play music but with time you can’t help but improve somewhat and working together over a long period of time you get to know each other’s style of playing or singing really well.  Having Jason and Adam join the band felt like it provided some opportunities to make different sounds as they both have very distinct ways of playing and it’s been a lot of fun to work with them both.

In terms of how the recording process has changed, we’ve actually had a lot of experience with different techniques and approaches despite the limited number of people we’ve recorded with.  Our first couple of singles were recorded by Jesse Gander at Rain City, who is a masterful engineer but takes a more hands-off approach to production.  At the time we were not very confident in our abilities and wanted to work with somebody who had a more involved style so we decided to start working with Felix Fung at Little Red Sounds after really liking the sound of a 7″ he made for a local band called The Parallels.  We made three LPs and two 7″s with Felix in his various studios around the Vancouver area and learned a lot from his approach.  We knew Nostalgia would have a bit of a different feel than the earlier records and wanted to try working with somebody new and decided to go with Jacknife and are really happy with the way everything sounds.

What about Spectres’ musical style? How has it changed and evolved with the underground punk scene?

When we look back and listen to the older material it’s pretty obvious that there has been a big departure in terms of the sound then versus the sound now.  That being said, we haven’t made a lot of intentional decisions about going in a certain direction or anything, with the exception of maybe saying “I’d like to write a song that sounds like this…”.  Our writing process is pretty organic and usually just reflects what we are listening to at the time.  When the band started, it was specifically to explore early British anarchopunk influences because at the time we didn’t know anybody who was playing that style and wanted to do something different.  Over time the interest in anarchopunk led down a lot of interesting paths and while we still love the bands that inspired us in the first place we’ve all been exposed to so much more music that has naturally just sort of seeped into our creative process.  In some ways, the underground punk scene is the same as it ever was, but perhaps as a byproduct of aging or possibly the incredible panacea of music that can now be easily accessed online people generally seem to be a lot more open-minded than they were when we were growing up and starting Spectres.  This band was started as a reaction to the fads that seem to take over the punk scene in North America and we’ve never wanted to lock into just making one type of song, so it’s been really cool to have people support us and what we are doing creatively as our music has evolved.

Why did you choose “The Head and the Heart” as the first single?

Honestly, that was Jacek from Artoffact’s call.  When we first sent him the record to listen to he just grabbed on to The Head and The Heart and
felt strongly that it should be the first single.  Aside from being our boss, he’s also somebody who listens to a lot of music and we trusted his instincts on this one.  I think we all kind of recognized as well that The Head and The Heart kind of contains both of the feelings that we tried to convey on Nostalgia, it starts with an airy and light riff and then changes into a darker and more driving song so it seemed like a cool way to introduce listeners to what we were trying to do with the album.

What’s the biggest lesson you’ve learned over the last 15 years in a band?

Bands are like any other relationship and they take time, communication and perseverance to make work, and they will go through ups and downs.  Sharing a creative project requires compromise and understanding of one another and that’s not always easy.  Like any other relationship, it can be really rewarding if you are willing to put in the time and energy required to make something work over a long period of time and your creative output will mature just as the relationship does.

You have a tour coming up, along the West Coast. What’s your favourite part about touring?

Meeting new people, seeing new bands, checking out new venues and cities.  Getting older doesn’t necessarily make being on the road any easier but we are very fortunate to have supportive partners, families, and careers that allow us to still hit the road and play for people all over the world.

I’ve really loved the whole Riki Lp but there’s something about “Come Inside” that really grabs my interest.

We are planning to play some shows on the east coast this summer which we are really looking forward to, we’ve only ever toured out that way once before and it, unfortunately, coincided with Hurricane Sandy so this kind of feels like the first time.  We have been working on new material and are hoping to have another LP written before the end of the year.