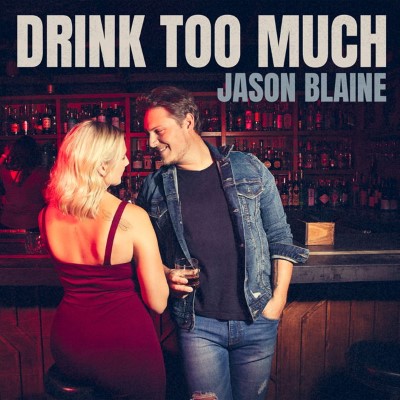 Country music singer-songwriter Jason Blaine grew up in Pembroke, Ontario, but now calls Nashville home. He resides in Henderson, Tennessee, with his wife and four children. This multiple CCMA, SOCAN, and CMAO award winner with over 20+ radio hits, six full-length albums, over eight million digital streams still feels like he’s at the beginning (of his very successful career) with a long way to go. Because he is so humble, I can see why he feels this way. Blaine is one of the most talented country music artists in the country scene today.

Canadian Beats had the opportunity to chat with Jason Blaine about his new single “Drink Too Much,” his upcoming album, his charity work and what life holds for him in 2020. This is what he had to say.

“Drink Too Much” was released everywhere on January 24. Blaine is very stoked for about this one. This tune is just so upbeat. It’s a toe-tapping, dance along to it, “get a little loose, go a little crazy” kind of song and he had someone quite special in the photo as well.

How did decide to record this particular single? Who were your songwriters? And, how much fun did you actually have recording “Drink Too Much”?

“Drink Too Much” was actually a song that was pitched to me this past year. It’s a song written by Josh Thompson, Josh Kerr and Laura Veltz. When it came time to start choosing songs to cut, I realized I actually didn’t have anything like it. I had been writing so many deep songs, emotional songs, lovey-songs, that when I first heard it, I thought, YES! This is just fun! It’s also lyrically exactly how my wife and I both get to feeling sometimes. Juggling careers and our four kids, sometimes we just need to take a night to call a sitter and hit the town with some friends and yes, maybe Drink Too Much! Does anyone know what I mean?! It was a lot of fun to record and Danick Dupelle did a great job on the production.

“Drink Too Much” is available via all streaming services so check it out everywhere you get your country on!

Last summer, a new chapter started for Blaine. He began work on his new album, which was produced by the very talented Danick Dupelle (Emerson Drive, Tebey). Blaine is “doing what he does best, creating great country music, and telling stories of home, love and nights on the town.

I read that you found and wrote songs that embody your artistry. Can you expand on that a little?

Absolutely; as a country fan myself, I always like a collection of songs that represent every aspect of life, or at least more than one. On this new EP, there’s fun in songs like “Drink Too Much,” “When I See You and Mood Swing,” and there’s a lot of heart in songs like “Home For The Summer,” “Go With Me” and “Helluva Band In Heaven.” The songs are all stylistically diverse as well. I tend to like a lot of different things. I hate to be boxed in.

You mentioned that you have big plans for 2020 and can’t wait to share those plans. What are some of your dreams for this year and this decade?

Oh gosh, I haven’t quite mapped out the whole decade but for this year, I’ll release a new EP, host my 7th Annual Charity Fundraiser, play some great shows and maybe even record some Christmas music. If I’m looking further down the road, I’d really like to record some traditional country, roots and blues music. It might be a little side passion project.

Your fans are very excited for the release of this album, which I assume, are a part of your big plans for 2020. Do you have an idea when it will be released?

I think we’re looking at a May release but who knows, it might come sooner!

Nothing firm yet, but it’s possible:)

In between releasing hit songs and co-headlining tours with Tebey, Chad Brownlee and Deric Ruttan, Blaine also found time to start up his annual Jason Blaine Celebrity Charity Golf Classic. Over the past five years, fellow artists and hockey legends ranging from Dallas Smith, Tim Hicks, and Gord Bamford, to Doug Gilmour and Bryan Murray have all contributed to helping raise over $500,000 for various hometown charities in Pembroke. This funding helps support seven local Pembroke organizations through the Jason Blaine Charitable Fund “Helping our Community” initiative.

Says Blaine about his charity work:

“I have heard said, to whom much is given, much is expected. As a recording artist, a husband, father of three and as a Canadian and Christian, I feel I have been given a lot and I feel fortunate to live my dream both personally and professionally.”

This country is a better place because of the way Blaine feels.

Let’s talk about your charity work. Last December, you flew home to perform at a special charity event for a little girl who is battling an inoperable brain tumour. Along with other local musicians, you helped to raise thousands of dollars for that girl’s family at a benefit concert.

Tell us why it is so important to you to give back to your community and how you chose the charities that you have?

It’s important to me to use this gift of music to bring people together and do something impactful and meaningful and to make a difference. At the end of the day, that’s the stuff people will remember and what I’ll be the most proud of. We choose the charities together as a committee through an application and evaluation process. My vision was always to help out as many wonderful organizations as we can and to date, we’ve supported close to 40.

Jason Blaine’s next charity event is June 16 and 17 – Jason Blaine 7th Annual Celebrity Charity Golf Classic. This is a big one.

To donate to or be a sponsor of the Annual Celebrity Charity Golf Classic, please go to www.jasonblainecharity.com

Let’s just have a little chat about Jason Blaine so those who don’t know who you are, can.

I’ve learned that there are hills and valleys, hits and misses and that you have to just be thankful for the opportunity to do what you love and define success for yourself. The fans always remind me why I love to create music, every time I get out on stage and hear them singing along.

And last but not least … besides what we’ve chatted about, what do you believe the futures holds for you, both professionally and personally?

I’d love to travel the world more and take my music to some other countries. I can see from the streaming numbers that people are listening in the UK, Australia and beyond and I’d love to play in some different places and go visit and meet people. Personally, I want to just be the best dad and husband I can be and work to help make a positive impact on the world wherever I can.

This was a truly wonderful interview for me. It made me smile when I read his answers. I hope you enjoyed reading all about this fine gentleman and artist, Jason Blaine.