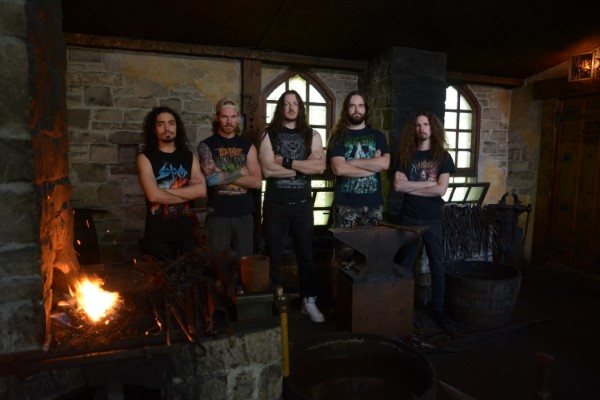 Although formed in 2017, it wasn’t until 2020 that a full lineup was finally realized. Now, they are ready to take the next move, with the release of their upcoming LP, Guardian of the Fire, set to be released on March 20, 2020.

Check out “Bound by No Fate” below and find out more about Raider via our Five Questions With segment.

Raider is a Death-Thrash Metal band from Waterloo, ON, Canada. We are a five-piece band comprised of vocalist Angelo Bonaccorso, lead guitarist Gabriel Rosa, drummer Kevin Withers, bassist Brandon Sanders, and guitarist Ira Lehtovaara. We were formed in mid-2017 here in Waterloo with the like-minded intention of bringing something fresh and heavy to the Canadian metal scene.

We wanted to bring a different kind of heavy to the modern metal scene. We don’t think you need to be in Drop A to sound heavy, all of our songs are written in E-standard. Our songs explore different motifs, sometimes we are grooving, sometimes in full speed charge. Our writing style is really based on experimentation. That is how we started – simply jamming with each other and each member bringing their own unique strengths to the table with their instrument. We spend a lot of time in our rehearsal bouncing ideas around and improvising/sharing riffs and beats and vocal patterns. Once we have nailed down the sonic elements, Angelo will take up writing the lyrics. Our lyrics are centered around themes/stories/experiences we all connect to as a band.

We will be releasing our debut, full-length record on March 20th and we will be having a show at Maxwell’s Concerts and Events in Waterloo, ON the following day on March 21st to celebrate the release! The event page will be live on our Facebook page once we announce the show on Wednesday, February 19th. Our live performance is about being as sonically tight as possible with huge energy. If you’re looking for a show that feels like a sonic barrier breakage to the face – you will connect to this live performance.

I would suggest our first single: Bound by No Fate. It is the purest form of what we are trying to achieve with our sound. We also supported this single with an awesome music video filmed by Michael Amaral and an incredibly dedicated group of our friends. This will be out on February 19th on Bandcamp (where you can preorder the record) and on all digital platforms.

We love Annihilator! Their newest release was unreal, a huge inspiration to our band and to all Canadian metal acts. Forging the scene here in KW was also made possible by our brothers in Invicta and Cathartic Demise. We also have to give some love to our friends from the West coast: Terrifier, Hyperia, Eye of Horus, Untimely Demise, too many great bands from there to name.