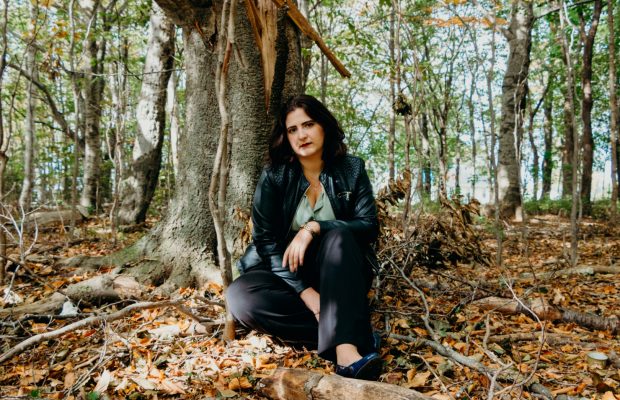 Born in Hamilton, ON, raised in Montague, PEI, Brielle Ansems is no stranger to music, as a recent graduate of Holland College School of Performing Arts Theatre Performance program. Her lyric-focused music has been called an emotionally charged, poetic experience.

She has recently released her new single, “Ironside”, which features her emotionally charged vocals, on top of a building, hypnotic folk-pop track.

Check out “Ironside” below and find out more about Brielle via our Five Questions With segment.

Hello readers! My name is Brielle Ansems. I was born in Hamilton, Ontario in ’94. At the age of ten, I moved with my parents and three older brothers to Prince Edward Island, which I’ve called home ever since. I’m a singer-songwriter, actor, and klutz (I tripped on my way to except the award for “Most Clumsy” when I graduated high school— no joke). As I write this, I have a cat on my lap, a bourbon in hand, and a messy room I am trying to find motivation to tidy.

Broadly speaking, I’d call my music indie folk-pop, with influences of soul and r&b. In terms of subject matter, I strive to tell the truth, even when it’s painful; I think there’s a powerful hope that comes with acknowledging our pain and making something beautiful from it.

On February 21st, I am playing at The Pourhouse, followed by Baba’s Lounge, in Charlottetown, PEI. My album, This New Hurricane, drops on March 6th, so I’ll also be hosting a full band release show later that month. I’m planning to tour nationally and/or internationally within the next year or so.

My live shows tend to be a bit looser than my studio sound. I’m more flexible with the power in my voice, and I really feed off the energy of the crowd. I perform in order to connect with people on an unembellished, honest, emotional level, and I like to think that comes across in my shows, whether you see me playing a solo acoustic set or with a full band.

That’s a tough one. I would say ‘Fade,’ the opening track from This New Hurricane (and the origin of the title), is a pretty good representation of my aesthetic. There’s a melancholy to it, but it’s combined with a kind of catharsis that comes with letting go and just letting yourself feel without judgement. It also showcases the production that went into the album as a whole. I was lucky enough to have a phenomenal team with me at every step of the process, and you can hear how much care everyone put into the project on that track.

I grew up listening to Joni Mitchell and Blue Rodeo quite a bit, so I’ve always found them influential. Lately, though, I’ve been listening to a lot of Bahamas, Daniel Caesar, Mo Kenny, Dan Mangan, Hey Rosetta!, and The Wailin’ Jennys.