Home / Interviews / Five Questions With A Is For Arrows

Five Questions With A Is For Arrows 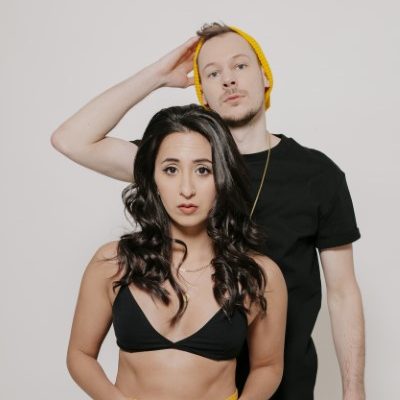 Toronto, ON-based rising electronic pop duo, A Is For Arrows has released their new single, “Roses” along with a video to accompany the release.

“The initial demo of Roses poured out of me in 20 minutes. I wrote the song from top to bottom as if it were already in existence and that’s how I knew it was special from the beginning. It’s the oldest song of ours that made the EP but somehow continues to evolve in its meaning and feeling. It came from such an authentic place – when you first fall in love with a person and everything is perfectly magical and you can envision a beautiful life together.”

“Alessia and I argue about when the song was written, but I think that’s a positive thing. Really because this song means so much to us. It’s been with us on this journey the whole time and has evolved so much since its inception, I think that’s what makes it special. For me this really feels like the start of everything for Arrows, it’s how we start our show. It’s the first chapter of our book.”

Check out “Roses” below and find out more about the duo via our Five Questions With segment.

Hey, it’s Alessia & Eric from A is for Arrows! We’re a duo from Toronto, Canada! We are so happy to answer some questions for Canadian Beats!

I wish we could all just exist in a genreless world, but for the sake of making our music more tangible, I think the closest genre that would best describe us is Alternative. I say that because In my head alternative means “everything” and I think that our project really embodies that sentiment. We create what we want to, based on how we feel at the moment, rather than what will help us fit into a category.

Our music to me is a rollercoaster of emotions in melody. I’m definitely a big fan of pop elements and then also a big fan of R&B, so I think from my perspective at least – I’d say Dreamy moody pop with dark undertones. This is always the hardest question for me because I’m always trying to move forward in our sounds and our music really does showcase where we are in the present moment.

Definitely moody- a midnight drive..cinematic…you know that feeling when you’re driving alone at night and everything just feels emotional and magical.. that’s what I think (I hope) our music is.

Our writing style is pretty spontaneous. Sometimes I’ll start an idea with lyrics and melody and then bring it to Eric, sometimes I’ll write a whole song and then we’ll bring it straight to the studio and finalize it with our producer (this is more of a rare occurrence though) sometimes Eric and I will just start from scratch and just see where the music takes us. We used to write to fully produced tracks made by us but slowly learned that it doesn’t work very well. We would work on a beat and listen to it 1000 times over and then eventually lose inspiration and would end up putting it in a “to work on later” file….that is yet to be opened!

Guitar and vocal is where it’s at for us right now in terms of writing…Eric will play and I’ll just start singing a melody and when I think we have something that feels right, we start writing lyrics. It has to feel right, I’m a perfectionist and if a part doesn’t feel right or if I don’t feel like it’s believable, we adjust.

Eric: ​I would describe our music style as indie-pop but we feel it goes deeper than that. Both of us started from such different places musically: Alessia from the Rnb & Pop side and
myself from the Rock side. As we’ve grown we have learned to mix our different influences and make them work together in a way unique to us. I believe our music to be dynamic and our message honest and relevant.

When it comes to how we write, really anything goes. Sometimes one of us will start an idea on our own and bring it to the other, or we work through ideas together. We do a lot of co-writes
with other writers, I find it to be a good way to build relationships and learn more about writing songs. What stays consistent is our drive to write songs that really mean something to us. Everything we create is a feeling in the moment. Keeping things spontaneous is very important to us

Alessia: ​Yes actually! We have a show at The Rivoli on February 27 in Toronto, you should come!

I think our live shows are always evolving but our main goal for live shows is Energy…a lot of energy. I give myself whiplash at every show. As two people who love going to shows, we always wanted to make sure our shows were the best they could possibly be. We want the crowd to feel connected to us, and each other, so we do a lot of call and response and try to get the crowd moving.

I would describe our performance as a rollercoaster of emotions. From the smallest most intimate moments to parts where we try to get the crowd to jump in sync with us. Having our show be as dynamic as possible is key, in sound and in the visual aspects. I want people to let go of reality and be with us in the moments we create.

​If you were asked to suggest only one of your songs for someone to hear, which would it be?

Alessia: ​I agree with Eric on this one! I think as of right now- it would be roses. sonically and energetically it’s all-encompassing of where our band lives in the present.

Eric: ​I would say Roses would be the first song. I think it’s the perfect middle ground of everything we have done thus far. I think it represents the feel and the sound of the band very well. It literally goes from 0 to 100 in the span of almost 4 minutes and shows all our in-betweens.

I love so many Canadian artistsI’m a huge fan of Drake and The Weeknd, I think Lights is a total badass, Jessie Reyez is inspiring to me in both her songwriting and her vocals Oh and Jocelyn Alice!! She’s also someone I admire and look up to… she’s such a talent. I also like Billy Talent, Tegan And Sara, Valley and of course Justin Bieber!

Eric: There are a lot of great new artists in Toronto! I really like Just Jon and Dom Dias, Jade the Moon, Lolo just to name a few. Lately, I’ve been listening to the Jackson Square album by the Arkells, one of the old CDs in my car. Of course, I like The Weeknd and Drake. War by Drake is one of my favorite new songs. I also still love Artists like Rush and Bryan Adams who we’re both big influences on me growing up.