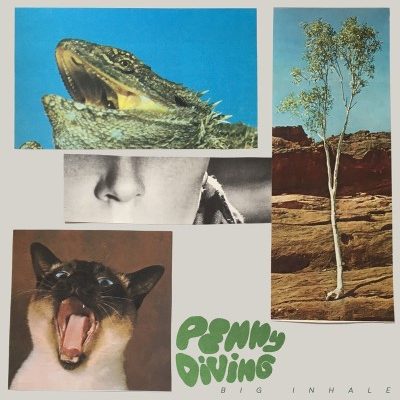 Big Inhale is the debut album from Montreal based band, Penny Diving.

Big Inhale starts with the low gritty rumble guitars that sound like cars starting up. Then, just as the drums begin to rev the guitars’ pace to a full crescendo, the guitars swing down low to pick up the delicate sound of the band’s female vocalists and pop synths before speeding away again. Overall, this is Big Inhale’s sound: loud guitars and drums to build a solid chassis, while the synths and vocals join the listeners in the passenger seat for a wild, energetic ride. You can almost picture this album being the soundtrack of a teenage road trip into an endless summer. This fits well with the lyrical themes of the album which Penny Diving’s press notes are explicitly about “themes from childhood aspirations to an urgency to feel life more fully, and is ultimately a call to empower one’s self.”

Standout tracks to me were “Nineteen” and “Undertow.” “Nineteen” has a great feeling of optimism to it, but is also distinctly tinged with feelings of equally great sadness. This mood fits well with the lyrics as they list the confusing and conflicting platitudes one is given at this particular age but optimistically conclude “I’ll figure it out” — even if the song implies this is highly nieve and unlikely. “Undertow” captures the chaos of the sea as the accompaniment seems to be pulling itself apart while still trying to push itself together. This fits well with the lyrics which describe an intense and chaotic love that “knocked me off my feet” but is more than worth enduring.