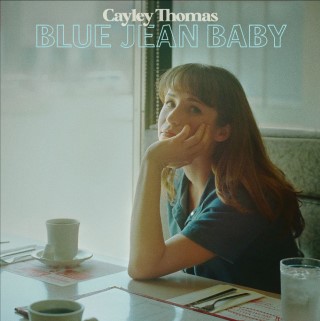 Alberta’s Cayley Thomas has released a video for her single, “Blue Jean Baby”. This is the second song from her forthcoming album, How Else Can I Tell You?, set to be released on May 1, 2020.

Cayley Thomas is “a singer, guitarist, and songwriter from Edmonton, Alberta whose natural affinity for constructing catchy melodies reveals her striking vocal range and character. Under a delirious guise of simplicity, she weaves sensitive eccentricities and cathartic declarations into her own brand of unique, knowledgeable pop.”

Thomas’ latest single, “Blue Jean Baby” is said to explore “the pattern of feeling responsible for the emotions or actions of others at the expense of our own wellness. It’s like when you’re on an airplane and they tell you to put your oxygen mask on first before assisting other passengers.” Thomas came up with the concept for the video, which is both directed and produced (with the help of her audio engineers Nik Kozub and Steve Chahley), while home for the holidays. Thomas explains, “I wanted to highlight this woman who can be so elegant and powerful when free, but who elects to help this other person and ‘take on their weight.’ I think we can become preoccupied with trying to do someone else’s work for them as a means of avoiding our own self-reflection.”

This is only one of the sneak peeks of Thomas’ upcoming album. How Else Can I Tell You? is described as “a collection of songs that reflect upon a period of subconscious overwhelm and the subsequent shift into conscious thought and awareness.” May 1st, 2020 – mark the date on your calendar!