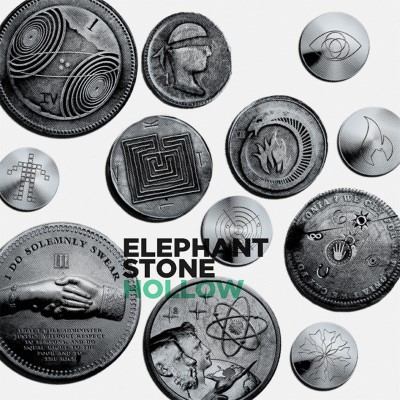 I’m generally hesitant to draw direct comparisons among artists unless those parallels are obvious. And, well, in this case, they kind of are. When listening to Elephant Stone’s new album, Hollow, bands like The Who, Pink Floyd, and others from the golden age of psychedelic/rock concept records come instantly and continually to mind. Like those groups, Montréal’s Elephant Stone have here designed a musical experience for lovers of the album as a whole, cohesive entity.

I mentioned concept records, and this one fits that designation with pervading themes that can perhaps be summed up succinctly as the search for meaning and connection in a dystopian age. Also, like the best of such releases, it flows almost entirely without pause from start to end like one long, epic number. Singles be damned! While each of these tracks makes for an enjoyable listen by itself, to not appreciate them in their total context is to miss out on the seamless transitions from one song to the next, the recurring child-sung refrains beginning in “Hollow World” and carried forth elsewhere, or the dynamically shifting contrasts between mellow grooves like those of “Fox on the Run” and heavier elements such as the hard-rocking guitar and drums in “Land of Dead.” Then there is Rishi Dhir’s renowned sitar talent, which, in addition to the front man’s often Beatle-esque vocals and bass work, is a prominent feature spanning and uniting all the disparate pieces.

The album in its fullness is a bit of an adventure, and there is plenty to take in along the journey to its culmination. As such, you might want to set aside some time to shut out all external distractions and fully immerse yourself in this one. It’s worth making an event of!