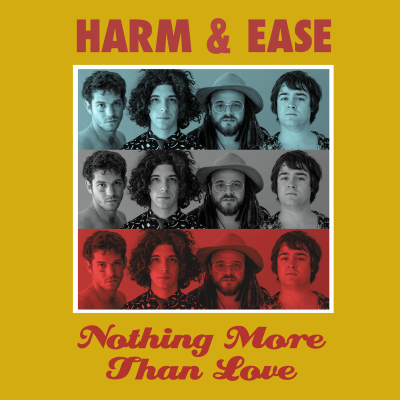 Ontario-based rock & roll band, Harm & Ease is made up of Rylan Whalen (vocals), Danny Lopez (guitar), John Goodblood (bass/guitar), and Ilan Amores (drums). The band is set to release their new single, “Nothing More Than Love” tomorrow (February 14, 2020), but we have teamed up with them to give you an early listen. The single gives you a taste of what to expect from their full-length album set for release in March 2020.

Check out the single below and find out more about Harm & Ease via our Five Questions With segment.

We’re an international Modern Rock Band who is fully committed to creating honest engaging music that resonates universally. We’ve been influenced and moved by the great rock bands of the 60s and 70s and we strive to serve a similar inspiration to a younger generation.

We all have very eclectic tastes in music and all very inspired by many different genres spanning from many different decades so it can be somewhat difficult to pin down our exact sound. It’s safe to say we play rock music but we have many songs that can span from folk to hard rock. We are always pushing ourselves to be better musicians and experimenting. The beauty is there’s no real way to write, we’re just lucky to have such a close relationship and bond with each other,  the tunes usually just flow right out. Our music is passionate and our performances are theatrical.

We have a string of Canadian shows to be announced very soon. Our live shows can be defined as a band facing off against the world. The stage becomes a battlefield in this ultimate expression of who we are and what we do. When we come together live, we become bigger than the sum of our parts and put our minds and bodies to their maximum use. Even after hundreds of shows under our belts, we continue to develop and will bring a new show in 2020, comprising greatly from our new album.

If we could suggest any of our songs we would propose our new single “Nothing More than Love”. This one exemplifies a good deal of what we represent. Both the light and dark side are expressed. The tune starts slow and relaxed but comes to an explosive peak at the end with a soaring vocal melody and an explosive guitar solo.

We love a lot of Canadian artists ranging from the classics like The Band, Neil Young, Leonard Cohen and The Tragically Hip to modern bands like Arcade Fire, Alvays, The Beaches and The Sheepdogs. There’s a lot of great new music coming out of Canada, and we wish to form part of that family.