Evenko and Live Nation, in association with Universal Music Canada, unveiled yesterday the lineup of the very first edition of LASSO MONTREAL, a world-class modern country music festival taking place on Montreal’s beautiful Parc Jean-Drapeau on August 14 and 15, 2020. In addition, LASSO in the city, a series of pre-festival shows, will also take over several venues in Montreal on August 13th. 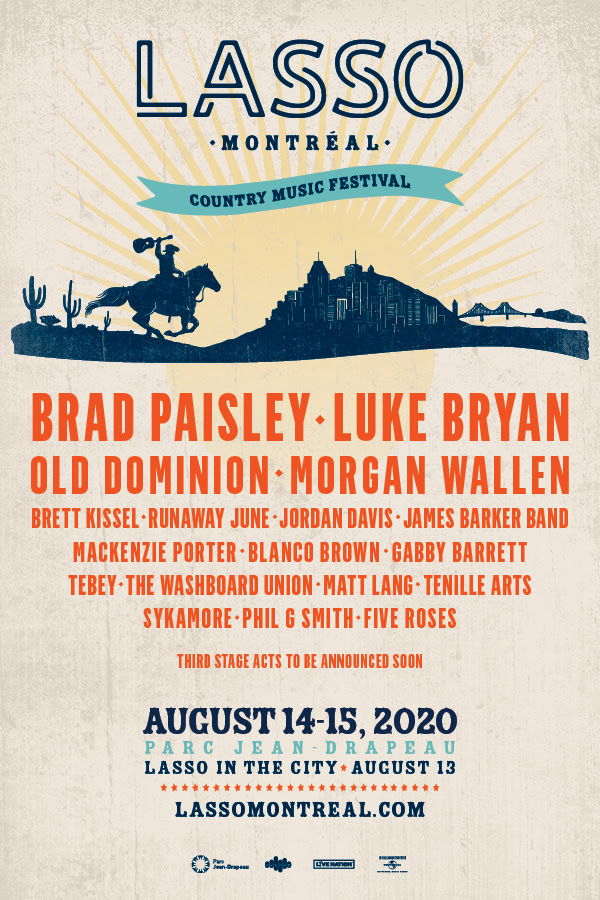 Luke Bryan, an unrivalled country superstar with more RIAA certified digital singles than any artist in the genre, will kick up the dust when he hits the stage for the festival’s first edition. He’s got a new album in the works, called Born Here, Live Here, Die Here, and he’s bringing his hot country party to Canada to celebrate. Luke will surely be proud to be right here in front of the adoring Montreal crowd which couldn’t get enough of the megastar when he sold out the Bell Centre last time he was in town.

Country music royalty Brad Paisley, a distinguished member of the Grand Ole Opry, has a list of achievements and awards that puts him in a singular category – the legendary singer has sold over 11 million albums worldwide, amassed a treasure trove of Grammy’s, CMA’s & ACMA’s, and he’s uniquely qualified to remind us about the immense power of country music to bring people together. The last time Brad played Montreal was 2014, so fans will be overjoyed to see him take the stage at the first edition of LASSO.

Big Loud recording artist Morgan Wallen is already a huge country star in his own right, and the young singer is only getting started! After wowing audiences and judges on season 6 of The Voice, Wallen went on to release a hugely successful debut album, If I Know Me, which yielded massive hits like Whiskey Glasses and most recently Chasin’ You. He’ll be talkin’ Tennessee and all things country when he hits the stage at LASSO this summer.

The down-home goodness continues with Canadian artists who are doing a fantastic job putting the great white north on the hot country map. Brett Kissel, who grew up on a cattle ranch in northeastern Alberta, brings his country croon to LASSO as well – he was anointed International Artist of the Year at the Worldwide Radio Summit (an honour he shares with artists like Ed Sheeran and Adele), and won the JUNO Award for Country Album of the Year last year. Local hero Matt Lang will be right at home on the LASSO stage in front of his loyal fans who have propelled him to top the iTunes Country Albums chart. Other artists like Runaway June, Old Dominion (who will be performing for the first time in Montreal), and American Idol’s Gabby Barrett will also be on hand at LASSO, as well as a bunch of other great artists from far and wide that fans won’t want to miss. More lineup announcements are coming soon!

Single day passes will go on sale on a later date.