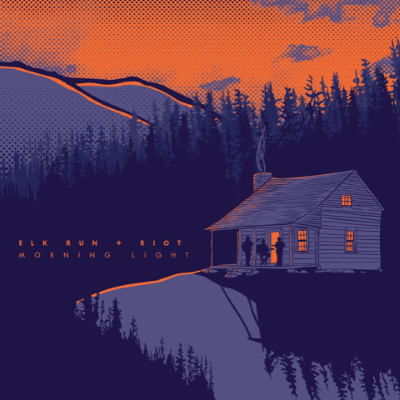 Alberta based folk-rock group Elk Run + Riot released their 4th album at the end of January, titled Morning Light. With the band into their 7th year as a group, sticking to their roots and also branching out with an album all recorded in one night.

The opening track “Brothers” is an upbeat track looking back on old times, with catchy upbeat acoustic guitars (and a blistering solo at the 3-minute mark) and relateable lyrics for anyone growing up and remembering the old times.

The title track “Morning Light” is another upbeat tempo song talking about self-worth with negativity mixing with positivity. This song is a feel-good song in any mood or setting.  “Castle Wolf” is along these lines, talking about changing and waiting but still making the tone feel likable.

“Time Flies” is a great showing of the band’s folk roots. The steady drumbeat in this song is simple yet rhythmic throughout, with the acoustic guitars and the great vocals mixing well together with a song relating to how fast time flies, hence the name of the song.

This band has a certain tone they aim for throughout this album and nail it each time. Even though the style of songs are similar, each has its own unique story and tone behind them. These guys have 4 albums and 7 years behind them, but only the future knows how far they will go with their great folk-rock music roots.