PREMIERE – Scott MacKay releases new single, “Half of Everything” 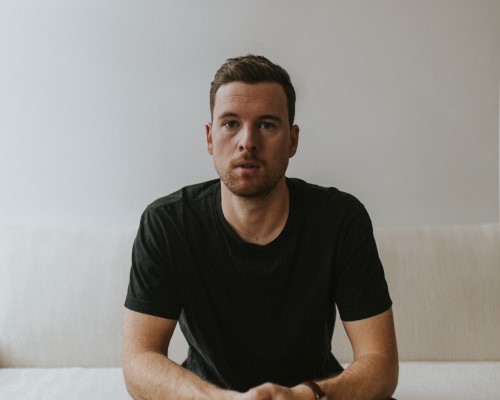 Charlottetown, PEI-based singer-songwriter, Scott MacKay is back with a brand new single, “Half of Everything”, a light-hearted, upbeat country-folk song with a narrative that showcases the absurdity of splitting things 50/50 in divorce.

Scott shares on the single,

“This song did not pour out of me. Most don’t. The name, “Half of Everything,” came to me first, and I was instantly intrigued. After 21-pages and lots of umming and hmming, I finally had something I was happy with. Typically, I write without the guitar and with melody in mind; Once the lyrics were finished, so was the song.”

Check out the single below and find out more about Scott via our Five Questions With segment.

My name is Scott MacKay. I’m a thirtysomething singer and songwriter from Charlottetown, PEI. I released my sophomore record, “Twin” in 2015, and since then I’ve spent most of my time holding a pen rather than a guitar. I took a lyric writing class from a professional songwriter (Marty Dodson) and traveled to Nashville to take part in Nashville Songwriters Association International’s (NSAI) Advanced Song Camp where I learned to better my craft. Aside from writing songs by and for myself, I also started co-writing and penning songs for other artists. I’m excited to finally be releasing some new material. My latest single, “Half of Everything” which I wrote during the lyric writing class will be available on February 7th.

My music would be labeled as “Americana” these days, but it’s largely influenced by classic country. I’m a sucker for witty lyrics like those of Shel Silverstein, who’s written songs for the likes of Johnny Cash and Bobby Bare, and that lyrical style is what I’ve been striving for in my writing. I always start with a title that intrigues me. Once that’s established I start workshopping different angles to approach the title and then I’ll create an outline. Once the skeleton is formed I start putting flesh on the bones so to speak by writing one line at a time. This stage of my writing process is a little chaotic but I find that the outline serves as a limitation which forces me to be creative yet intentional.

I have a show coming up on February 21st at The Pourhouse in Charlottetown as part of a Songwriter’s Circle and another show on May 29th at the new Trailside Music Hall.

You could expect a well thought out show that hopefully takes you on an emotional rollercoaster ride. I’ll share stories and songs that range from sentimental to comical. My goal is to always try and create an experience for people. I want them to leave feeling or thinking differently then they had when they arrived.

I would suggest listening to my newest song, “Half of Everything.” It’s a witty classic country narrative that showcases the absurdity of splitting things 50/50 in divorce. This song represents a comical side of my personality which is not evident in any of my previous work and I hope it will make you laugh, or giggle at the very least.

I just listened to Andy Shauf’s new album “The Neon Skyline” and thought the concept and especially the narrative element with the conversational lyrics were so unique to anything I had listened to before.

I’ve also been listening to Colter Wall & The Scary Prairie Boys’ “Bob Fudge” on repeat. I’m usually drawn primarily to lyrics (and his lyrics are great) but his voice is what captivates me. I can’t get enough of it.