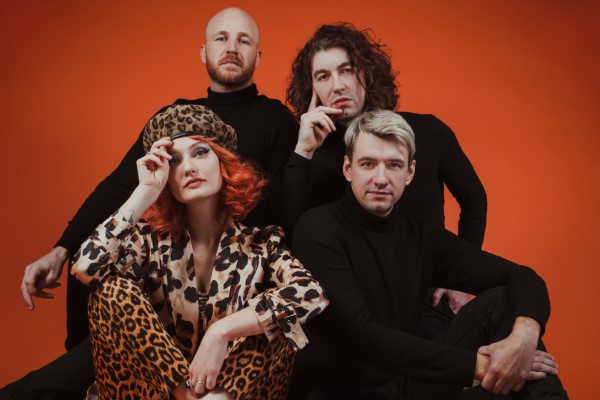 Vancouver, BC-based dream-pop band, Blonde Diamond have unveiled a video for their new single, “4AM Eternal”. The single has been said to be equal parts mysterious and approachable, swirling guitars are accentuated by arpeggiated bass synths and snap-tight rhythms. The video features frontwoman Alexis Young, radiant as ever in a leopard print outfit, as well as various other ensembles that stand out on the vibrant red background. I feel as though the video is reminiscent of the ’80s, and it suits the track perfectly.

Check out the video below and find out more about Blonde Diamond via our Five Questions With segment.

I’m Alexis, the self-proclaimed “Main B*tch” of Blonde Diamond, which is a dream-pop band previously described as “simultaneously dreamy and vicious”. We have had the fortune of touring across 4 continents, had a viral hit on Spotify with our first single “Feel Alright” (released under our former name Youngblood) and are really just a band of 4 best friends who feel pretty grateful to be making weird music and sharing it with the world.

We are all suckers for the somewhat traditional pop structure, so we’ll typically have that as a skeleton for a song, but surrounding that we create atmospheric, lush instrumentals and lyrically I try to dig a bit deeper to explore what it is that makes us all such emotional human beings.

We are playing an interactive Valentine’s day show in Vancouver at the H.R. MacMillan Planetarium, which will be a really special one-off show where you can fly through space while we serenade you in the space theatre. After that we are currently working on some Spring tour dates, so follow along for updates on where we’ll be heading.

Well, we just released our latest single, 4AM Eternal, which is a self-ode to sexual autonomy and feeling confident and liberated by releasing yourself to the strange. So I would start there, it’s best accompanied by the music video. 😉

Currently, I’m really into U.S. Girls, I think they are incredible, and I look forward to one day catching them live! Also, Kaytranada has been a fave for a while now, and fellow Vancouverite’s Peach Pit are really killing it right now!