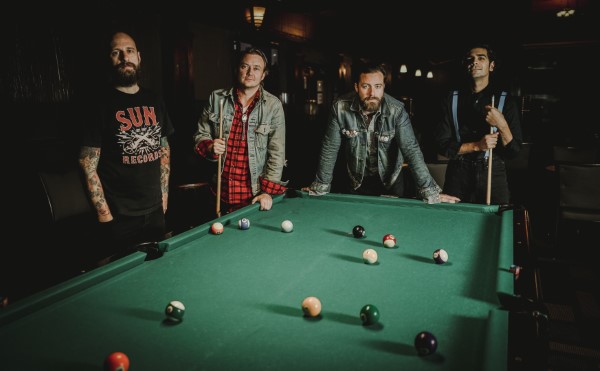 After their debut EP in 2015, The Dungarees have been climbing the charts, and fan’s hearts. With ACMA nominations and wins, and their latest EP already nominated for ACMA Album of the Year, The Dungarees are back. I had the chance to chat about their release of Twenty Something, live shows, and more. Check it out!

Let’s start by talking about your recent EP release, Twenty Something! 6 new tracks including your latest single “Don’t Make Em Like They Used To” and the title track “Twenty Something”. How does it feel to have the EP out in the world?

It’s such a relief! We’ve released several singles, but this is the first collection of songs released as an EP since our first release back in 2015. It’s funny because before The Dungarees, we all were in different bands that always released full-length, 12 song albums. It’s always been something we’ve considered as a band but the rate that things are moving forward for us, we’ve rarely had a chance to spend that much time in the studio. These songs definitely have a different, perhaps more mature tone than our previous recordings and that’s possibly a sign of things to come for us moving forward.

Why did you choose “Don’t Make Em Like They Used To” as your latest single?

This song is one of the most personal and transformative songs we’ve tackled. When we wrote it, the song had a different meaning for each of us in the band. It’s reflective, it’s nostalgic, it’s sad and it’s celebratory all at the same time. We hope that the song reaches people on the same complexity and level that it has reached us personally. The Dungarees will likely have our sound and creative direction altered because of this song and we’re really excited about that possibility.

This is your first EP release since Ain’t Through Being Happy Yet in 2015. How has your music changed since then?

The collection of songs represents the next step in the creative evolution of the band. Although it’s hard to believe, it’s possible we’ve matured?!?!

When we started performing and writing as a band, we only wanted to play up-tempo, high energy songs and even had an internal band motto of “no slow songs”. That was true of who we were at the time. As we’ve all lived through various experiences, both individual and shared, over the past decade, we have grown and ultimately feel the need to express who we are now.

These past few years have been anything but quiet, with winning three ACMA awards, “Anywhere With You” climbing the Australian Country Music charts and over 250 thousand streams on “Don’t Hold Back”. Has the writing and recording process changed for you?

It has changed. For one, we’ve found a great partnership with our producer, Russell Broom. He really understands the dynamic of the band and has helped us find our creative trajectory.

Having received the encouragement and commercial success has allowed us to explore a little deeper musically in terms of tones, textures and arrangements.  It’s such an incredible feeling to see our fans embrace us as we continue to try and push our boundaries.

Back to Twenty Something, the title track really stood out for me. The feeling of nostalgia is so powerful. The music video uses that sentiment as well. Tell me how the video came about.

The concept of the video was a collaboration of James’ and the director, Jay Lawrance.  Initially, we had thought that we might be able to try and follow the lifespan of a single character as they age. We considered using some CGI tools to make that happen but realized that it wouldn’t be as personal or as universal as it would be if we used people from all walks of life. The idea was to capture a moment that is familiar to so many of us; blowing out a birthday cake. The imagery is so representative of all of our universal march forward through our lives with chapters constantly beginning and ending. It’s particularly close to us because we were all able to have our friends, parents, children, and families playing the characters in the video.

Twenty Something is already nominated for Album of the Year at the ACMA Awards! What makes this EP so special?

We were lucky enough to win Album and Single of The Year at the ACMA’s last month.

It was a surreal moment for us, especially when we were in the same category as so many of our close and insanely talented friends. You never really know what people are going to connect with but it’s so special when they share the same connection to the music as we have. This EP has a deeper emotional content for us than our previous releases and we’d like to think that that’s why people have been drawn to it.

You have some live shows coming up, very exciting. What’s your favourite part of playing shows?

We play shows to 20,000 fans and shows to less than 200 and there’s no difference to us, as long as we are able to engage with the fans and they want to engage with us. There’s nothing better than playing to an engaged, enthusiastic audience. It’s cyclical. If we play well, the crowd can either choose to respond or not. But if they give us a little energy, it manifests and incubates with us onstage and we can give it back 100-fold. And then the cycle keeps growing. People may not know how much control and power they have over how a performance can turn out. So immerse yourself in the next show you go to! It’ll pay back in dividends!

Natalie Hemby’s last release was in 2017 but that album has been on repeat on the road. She’s possibly now best known for being in the supergroup The Highwomen but that solo album is awesome.

We’ll be touring across Canada through the winter, spring and summer of 2020 and then we’ll be heading back to Australia for a tour and possibly some studio time with INXS founding member, Andrew Farriss, whom we’ve become close friends with over the last couple years. Even though this EP just came out, we’ll definitely be recording new music and continuing to write when we can.

Thanks so much for your support!