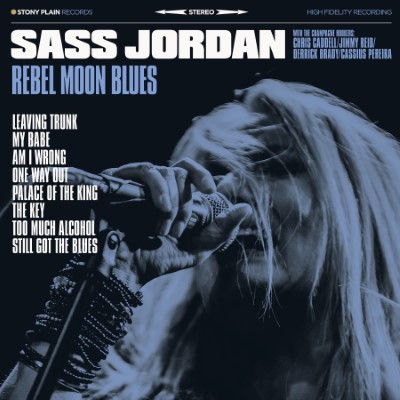 Sass Jordan has announced the release of her new album, Rebel Moon Blues. The new project will be available on March 13, 2020, via Stony Plain Records. The eight-song album will continue spotlighting her signature voice in a wholly-dedicated blues endeavor across seven diligently selected covers and one brand new knockout original tune, “The Key.” Rebel Moon Blues will feature Jordan’s personal take on the songs, sounds, and styles of everyone from Willie Dixon, Elmore James and Freddie King to younger, louder guns like Gary Moore and Rory Gallagher.

“The Blues has been there through my entire career. People have always said, ‘You’re so bluesy.’ And it’s true. My singing is blues-inflected. My songs use blues-type licks. I didn’t do any of that on purpose. It isn’t contrived. It’s just me.” Jordan explains.

Rebel Moon Blues was recorded off the cuff and on the fly in just three fast-paced days. Jordan and the Champagne Hookers (her touring band of guitarists Chris Caddell and Jimmy Reid, bassist Derrick Brady, and drummer Cassius Pereira, augmented by blues harp master Steve Marriner and keyboardist Jesse O’Brien) played live in the same room at the same time.

“The energy is so different when you’re playing it live” Jordan says. “It’s a different frequency, a different vibe. It’s very joyous. You can hear a lot of us laughing on there. I love that kind of thing.” Nailing down the track list was something Jordan put her whole heart into. “I wasn’t following any formula. I knew they had to be songs I loved and could really sink my teeth into.”

When it comes to performing these songs Jordan says there is no changing the lyrics either. “To me, what makes these songs fresh, besides our energy, is that it’s a female doing traditionally male stuff. And I sing the lyrics the way it was written…  If the singer’s singing about, ‘My girl,’ I sing, ‘My girl.’ That’s what puts the icing on the cake. I like approaching the songs the way they were written. I find that not messing with the original gender is particularly relevant in today’s climate. It’s great that we can get away with doing that now.”

Alongside the release of Rebel Moon Blues Jordan is developing another brand, Rebel Moon Whisky, along with her Kick Ass Sass wine.

“Whisky is my spirit animal. There aren’t any female singers doing a whisky line yet, that I know of. It’s a whole new thing! Besides, what goes better with blues than whisky or wine?” says Jordan.

Rebel Moon Blues will be available on March 13, 2020. You can pre-order the album right now via Jordan’s official website. Fans can get a taste of Rebel Moon Blues as the single “Leaving Trunk” has been released on digital platforms such as Spotify and Apple Music. Jordan is gearing up for the release of Rebel Moon Blues and is presently touring around the world with A Bowie Celebration until April 2020.

Rebel Moon Blues Track Listing:
Leaving Trunk
My Babe
Am I Wrong
One Way Out
Palace of the King
The Key
Too Much Alcohol
Still Got The Blues