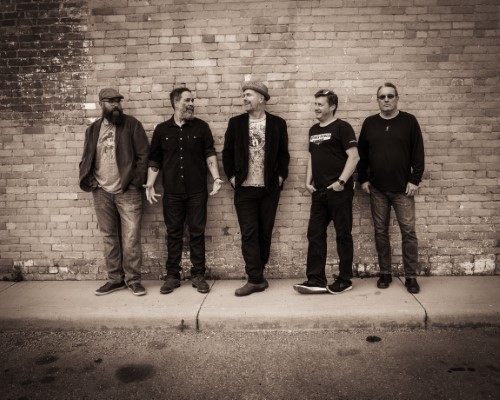 Welcome to Indie Spotlight. Every month at Canadian Beats we profile an independent artist that we hope you’ll get to know. January’s spotlight is The Brother Bicker Band.

What grew out of a collaboration on another project in 2015 with singer/acoustic guitarist Jeremy Hrdlicka, drummer Carl Raines, and guitarist Tom Mogan quickly turned into a new venture together as a band. Towards the end of 2015, keyboardist Ben Ellard brought his skills to the group, while bass guitarist Jim Duncan rounded out the band, joining in 2018.

The band calls their sound “Maple Whisky Rock n’ Roll” which they say is a throwback style with guitar-driven storytelling, a tight rhythm section, melodies and harmonies, and classic keyboards. Looking to artists of the past, they cite legends like Tom Petty, and Bruce Springstein as comparisons; bringing in elements of rock, country, folk, punk, and even reggae.

Unsurprisingly, their influences range in artistry as they do in the genres they play. From Zeppelin and Pearl Jam to Stevie Wonder, and Better Than Ezra, it all adds to the unique sound of The Brother Bicker Band – thanks to each member’s distinct tastes. Their non-musical influences are just as diverse; ranging from Monty Python to the Dalai Lama, and of course, their families and relationships.

From performing covers to creating their own sound as a band, their music encompasses a much fuller sound when needed, while sometimes it strips back to its singer/songwriter origins. According to the band members, their songs usually start in bits and pieces, but it’s a collaborative process that ultimately creates new songs.

So what does the future hold for The Brother Bicker Band? According to the group, the joy lies in making music. The fan’s reactions and the creative process are their main focus. Their expectations are realistic but their dreams are still big. For them, there is only the journey – the destination is still unknown.

The Brother Bicker Band’s music is available to stream on all platforms, as well as their website. Their new album, Hospitality and Northern Charm will be released on April 17, 2020, so stay tuned for that! Check out Spotify for playlists of their “Greatest Hits” and “Brother Bicker Radio” featuring the songs and covers they love to play live. Our January Indie Spotlight: The Brother Bicker Band.