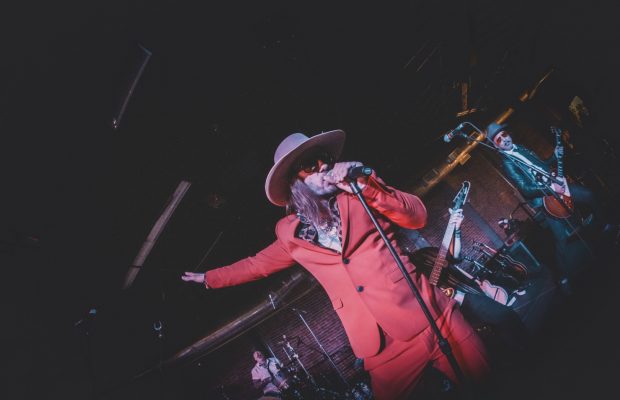 Life has been very good to Clayton Bellamy & The Congregation since we last interviewed him in June 2019 and we are very excited to given an exclusive interview with Bellamy as a follow-up.

When to go to his Facebook page to find out more about Bellamy and his ten-piece band, you find this:

“Born out of the belly of the South in the blackest swamp in the Delta. Baptized in Rock ’n’ Roll and bathed in the Truth. Covered in the Holy Spirit and Voodoo magic. Raised to do one thing and one thing only, deliver the good news of Peace, Love, and Rock ’ ’n Roll and raise up the people of the world to join the Congregation.”

This statement just wants one to see what this actually means and how does one get to be a part of this congregation.

Says Bellamy about 2019 (he also performed with The Road Hammers and solo):

“Well 2019 was one for the books! Three bands, five countries, hundreds of shows, thousands of fans, And all thanks to the love and support of the people who dream along side us. Who love and share the music and the message. Who believe that music can make a difference. Thank you for all that you are and all that you do.”

I had the chance to catch up with Clayton Bellamy to find out how 2019 was, what’s new and 2020 holds for him. This is what he had to say.

On November 8, 2019, Bellamy performed to a sold-out crowd at The Cannery Ballroom in Nashville, TN. This may not mean much to some artists but it’s a dream come true for this one.

You have been a part of the Nashville scene since you were 23. Tell us a bit more about why performing to a sold-out show at The Cannery Ballroom is so important to you. Also, explain what it means to you have your name on that wall.

I’ve always wanted to be a part of the fabric of Nashville. It’s one of the greatest music cities in the world where the best go to get better! It meant the world to me to play to a full house of fans and friends who I have worked with and known for years. I have had the honour of playing The Blue Bird, The Grand Ole Opry and even been invited to play the Ryman but having my name on that wall at the Exit in is my little badge of honour. It’s the first place I ever performed live in Nashville and it will always be a favourite memory for me.

As 2019 wrapped up, Clayton Bellamy & The Congregation has some pretty amazing stats on Spotify: 283.1K streams, 11.4K hours streamed with 51.2K listeners in 76 countries. They also celebrated over 100,000 streams of their debut single “Commandment 11 (Love Someone).”

Your stats on Spotify … wow! How do you feel about the success you’ve had with The Congregation in 2019, not only on streaming services but also as a whole?

The success of the Congregation in such a short amount of time has been overwhelming! I am blown away at the reception the music has gotten. This has been many years in the making and it was a big risk for me stepping out creatively and I am so happy that it has been so well received.

Your debut album, Welcome to the Congregation, has had so much success. What song from this album means the most to you?

It’s really hard to tell which of these are my favourite, I love them all. But “The Healing” is for sure one that has the strongest message of hope and redemption and hits home with me every time I play it.

When can we expect another release from Welcome to the Congregation?

There will be more music very soon! Let’s just say 2020 will be the year of the Congregation!

Bellamy exudes so much energy at his live shows and that is amplified by the immense amount of fun he likes to have when performing, He never fails to impress so it’s not hard to get excited about his music and shows.

What are your plans for touring in 2020?

We have already booked a number of amazing festivals across Canada for this summer as well as shows overseas. So, there will be lots of opportunities for people to see me live this year!

I have been in the studio recently with The Road Hammers getting ready to release new music with that band. I’ve also been writing and co-producing new music with a band called W3pons and also writing with my pals from Black Mountain Whiskey Rebellion on their new record. So, saying 2020 is going to be busy is an understatement! But I am very grateful to be out playing and making music, and as long as there are listeners I will continue to keep doing what I do!

2020 definitely sounds like it’ll be a stellar one for this amazing artist and I, for one am looking forward to see what this year holds for all Bellamy’s fans.

Welcome to the Congregation is available wherever you listen to music.