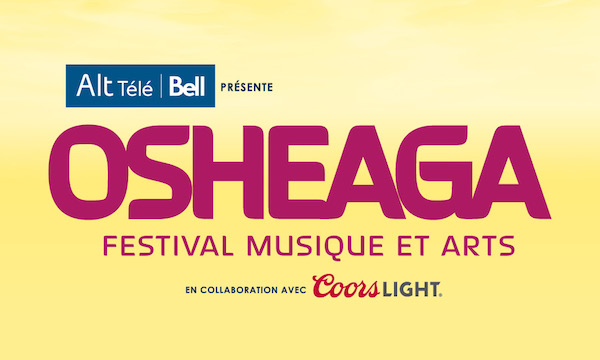 Montrealers woke up to some exciting news this morning, as the OSHEAGA Music and Arts Festival announced the three acts set to headline their 15th anniversary edition, taking place from July 31st to August 2nd at Parc Jean Drapeau!

First, the Foo Fighters will make their grand return to Montreal on the Friday night! Dave Grohl and his band of merry musicians are playing the festival for the first time, and when they take the stage, the entire audience will have no choice but to learn to flybecause Foo Fighters music is the kind of soaring rock that literally lifts audiences off their feet. Grohl and company, who are celebrating 25 years of rocking stages, have not played Montreal since 2011, and this promises to be a big one for them with the charismatic frontman teasing a new album and a “crazy” 2020!

On Saturday, American singer Lizzo brings her fire to Montreal, and she will make sure the crowd is feeling good as hell!! Fans will have the opportunity to take in the now legendary live show of the performer Time Magazine has anointed as Entertainer of the Year, who is playing for the very first time in Quebec!

Finally on Sunday, a triumphant performance by Kendrick Lamar will close the festival. In 2015, the hip-hop luminary moved the crowd with his lyrical prowess and high energy live show – since then he’s also received a PULITZER PRIZE for his 2017 album DAMN. That same year, he delivered a blistering set to a sold-out crowd at the Bell Centre. The rap icon also has a new album on the horizon for 2020, so fans can expect to hear lots of new material.

Festival sponsor Coors Light also announced that Of Monsters and Men would play on the Sunday, and the Osheaga team revealed that the full lineup would be unveiled tomorrow. However, after our friends at Nightlife.ca realized that the full line-up was displayed by mistake on a Montreal bus stop, the festival decided to officially launch the news (to whoever pressed the wrong button by mistake, thank you!). 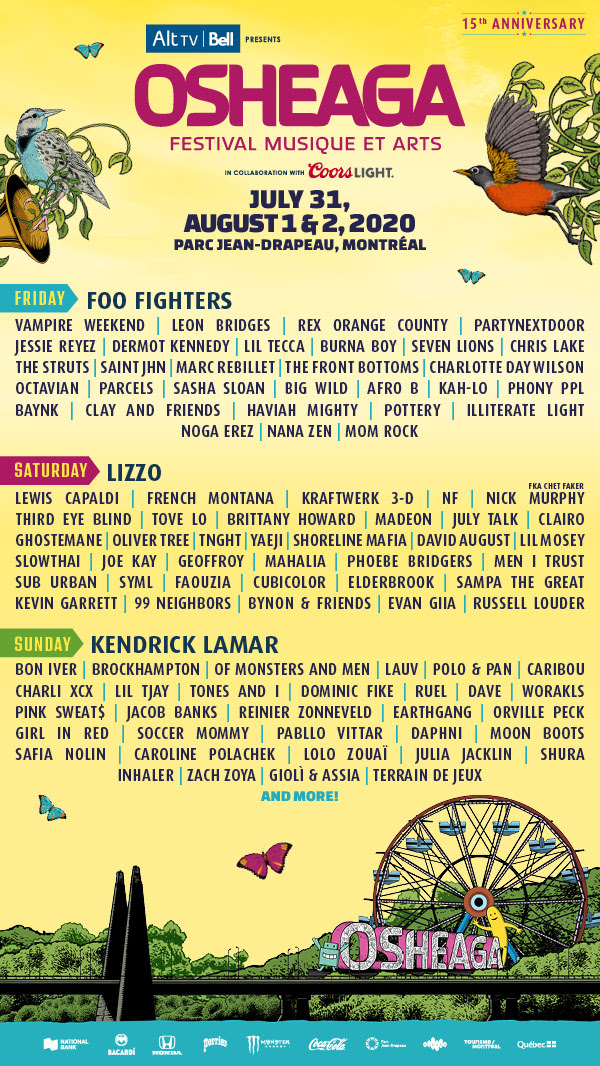 As everyone knows, Osheaga isn’t just about the headliners – there is so much more and so many great acts to discover and see before they become headliners themselves. Acts like Brockhampton, a diverse rap big-band who are already having a stellar year so far! Fans of hip hop will also be stoked for French Montana, who was one of the favourites of Ile Soniq 2018 – his performance at Osheaga will surely prove unforgettable to his legion of fans!

Australian indie pop star Tones And I will get the crowd in a frenzy with her mega hit Dance Monkey, a song that has helped her earn over A BILLION streams online so far!!! Canadian singer, Jessie Reyez, winner of the 2018 Juno Award for Breakthrough Artist, will delight fans when she hits the stage after having to cancel last year due to illness, but she’s back and ready to prove why she is one of the brightest young stars to come out of Canada. Rex Orange County returns with his special blend of hip-hop, jazz, and bedroom pop, and his 2019 album Pony will certainly translate live beautifully – here’s hoping he brings the lushness! Legendary krautrockers Kraftwerk, visionary pioneers of electronic music, will be on hand to show the kids how it’s done. Recent Grammy winners Vampire Weekend, who sold out MTELUS in 1 hour, will dish out some classic fan favourites and surely material from their critically acclaimed 2019 album Father of the Bride.

Leon Bridges will bring the heavy soul, as will Brittany Howard (singer of Alabama Shakes) with her solo outing, a deeply personal statement exploding with experimental sounds and warm tones. Speaking of warm tones, Bon Iver will undoubtedly get the crowd singing along with his swelling melodies and acoustic flourishes on Sunday night. He hasn’t played Montreal since his 2011 show at Metropolis (now MTELUS) which was an unforgettable night for all in attendance.

A variety of local artists will also be on hand to represent some of the best that Montreal has to offer with performances ranging from from the likes of award-winning songstress Safia Nolin who bares her soul every time she takes the stage, to Geoffroy, who fuses incredibly personal songs with beautiful instrumentation and warm electro beats.

Now we’ve got you all excited, here’s what you need to do: Festival passes are going on sale Tomorrow at 10am. General Admission costs $325, and a handful of Gold and Perrier Platinum Passes will be available for $600 and $1,250. With such a stellar lineup, there is no doubt that it will sell out quickly so set your alarms and head over to Osheaga’s website!