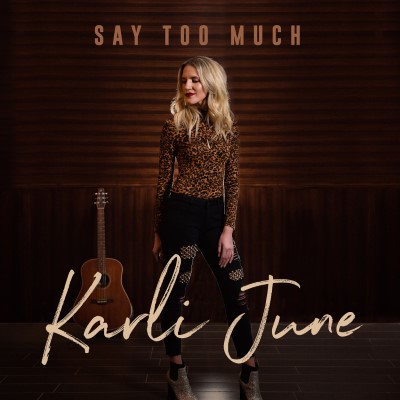 Country singer/songwriter Karli June is set to release her new single Say Too Much on January 24.

The empowering new track was co-written by Francesca ‘Francci’ Richard, Hailey Collier (Betty Who, David Guetta), and Scott Chesak, (All American Rejects, Panic At The Disco, Weezer). Chesak, also a producer on the track, is best known as the keyboard player in the multi-platinum selling band,  All American Rejects. His reputation as a session musician has allowed him to work with artists such as Adam Lambert, Lea Michele, and My Chemical Romance singer Gerard Way.

June’s budding career has a few accolades of its own;  a Top 10 finalist at the 2016 Ole Music Publishing “On The Spot” contest, and a CMAO Artist of the Month winner in 2017. Opening for artists like Terri Clarke and Chuck Wicks, June is no stranger to life at center stage. With multiple festivals under her belt, including the 2018 Boots and Hearts Emerging Showcase, she plans on taking her band to stages across Ontario in the summer of 2020.

June and Chesak met after June heard “Say Too Much” and her instant connection to the song led her to reach out to his team, hoping to record it. Chesak was asked to also produce the new single; a plane ride to Toronto later, and the rest is history.

We caught up with the dynamic duo to find out more about the new single, working together as artist and producer, and what’s next for Karli June in 2020.

Scott, tell us about the message behind “Say Too Much,” and how you and your co-writers came to creating it.

The talented co-writers Hailey Collier and Francci Richard really spearheaded the lyrics and message. It’s about how vulnerable you feel when you’re in love. It makes you irrational and hyper-aware of your faults. We are all human and make mistakes, but sometimes we overthink those minor missteps.

Karli, what was it about the song that you instantly connected with?

Immediately when I heard the song, I loved the anthemic chorus — that’s what drew me in! But after listening more closely I found I really connected with the lyrics and the message of wearing your heart on your sleeve! The way the melody was written really brings that emotion to life — and that’s something really special when a song can do that!

Scott, what’s been your experience diving into the country music scene? Have you noticed any considerable differences compared to the other genres you’ve worked in?

It was exciting to get out of my comfort zone and explore a new genre. Country has a very personal way of delivering a message. The listener can really dive into a person’s life and see the world through their eyes.

What is the dynamic like between the two of you as artist and producer?

Karli: I think the collaboration between Scott as a pop writer/ producer, and I as a country artist was a really great combination. It pushed me out of my comfort zone and Scott also pushed me to hear and think about things differently than I ever would have on my own. I think I’ll take the elements that I learned from this collaboration with me into further projects. It was also an honour to work with someone who has been so successful and remained so humble. Scott was amazing to work with!

Karli, your debut EP is set to drop in 2020. Can you give us some details about the rest of the songs? What kind of stories can we expect to hear from you?

Yes, I am so very excited about this! I have been working to write and release songs that are true stories, authentic to who I am, my upbringing, lessons learned, faith, love, and heartbreak. I can’t wait to share these stories in the hope that they will inspire others who listen! It’s amazing how music can bring people together and that is my hope for this EP — that people will hear themselves in it!

What can you tell us about the upcoming 2020 tour?

Karli: In Feb/ March we are doing a cross Canada radio tour, so I am excited to promote the single and meet some new friends at radio! That’s always my favourite part of what I do — getting to meet so many new people!

How can fans stay in the loop?

Karli: Instagram is a great way to stay connected with everything going on, and for new music releases!