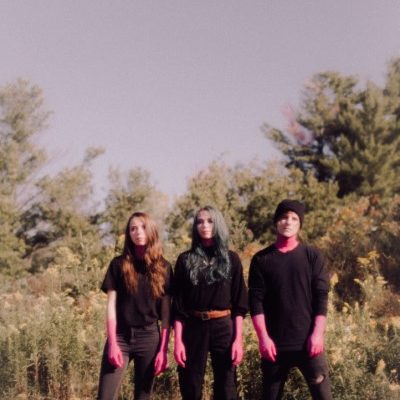 Courage My Love is back with the official music video for their newest single “Girls”, with their take on toxic masculinity. This three-piece rock band, based out of Kitchener, Ontario, is comprised of Mercedes Arn-Horn (Guitar/Synth/Vocals), Phoenix Arn-Horn (Drums/Programming/Vocals) and Brandon Lockwood (Bass/Guitar).

“Girls” is described as “more than an ode to the feminine and the trials and tribulations of being a woman. It’s also a cautionary tale to young men who may not understand how to respectfully treat a woman they are pursuing romantically.”

Given the time we live in, these ideas are strongly embraced by many. Keeping this in mind, the band shares some of the inspiration behind the song.

”For centuries now, women have fought against harmful social expectations and stereotypes to advocate for equality of the sexes. It has been established that certain beauty standards, gender roles, and cultural norms are toxic for society and the continuous struggle for equality. What is less talked about, however, is the concept of toxic masculinity.

Toxic masculinity refers to enforced cultural norms that can be harmful to men, women, and society as a whole. This concept is NOT intended to demonize men or male attributes, but rather emphasize the harmful effects of conformity to certain destructive masculine stereotypes ….

Society has conditioned many young men to maintain a ‘tough’, stoic, and assertive exterior while subduing true emotions. Many boys have been taught that showing vulnerability equates to weakness, and are bullied and ridiculed for it.”

Keeping these ideas in mind, the band “wanted to write a song that not only talks about what it’s like to date someone with those regressive qualities, but also shine a light on them so that men and boys can see how destructive these traits are.”

The song itself is a catchy tune that one can listen to over and over again. It has a very early 90’s feel, which also seems to be the inspiration for the video as it seems to bring in concepts that may be familiar to some. Without giving spoilers, you’ll have to check it out for yourself.

From this song, Courage My Love offers the following message:

“Contrary to what some might tell you, women DON’T want to be dominated or conquered.

We don’t want an ‘alpha male’  with a limited emotional range.

We aren’t turned off by vulnerability and sensitivity.

We just want to be loved and respected.”

Courage My Love have also announced a March tour with James Blonde. Make sure to check out the tour date nearest you!