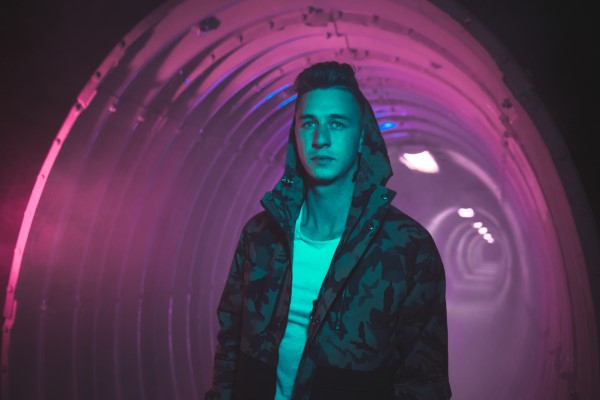 The Toronto-born, electro/pop artist is growing his fan base one song at a time. Myers early work has reached Top 20 on the Viral 50 Canada Spotify chart and debuted on several major playlists including ‘Time to Dance,’ ‘Viral Hits Canada’ and ‘New Music Friday’.

With a summer release scheduled for his debut album, we chatted with Myers about his debut single, his creative process, and his career bucket list.

What role did music play as you grew up?

Music was really my only escape from the anxiety and depression I went through as a kid. My dad was a musician as well so it just made sense. I remember whenever I’d be down or depressed I’d pick up my guitar and it quickly masked everything.

You’ve been very open about your past struggles and the road to where you’re at now. When you approach songwriting, do you ever feel apprehensive being so vulnerable with your music?

Oh for sure! It’s scary to think people are gonna see and hear you in your most naked form. But then I remember that opening up and being vulnerable might translate into people connecting and hopefully healing through it as well.

You’re getting ready to release your debut album Overthinking this summer, and you’ve dropped the first single “Along Tonight” which has a great electro-pop vibe. Tell us why this was the first song you wanted your fans to hear?

I think just overall it helps set the tone for the record. It’s positive yet with a dark undertone to it so it just felt right. Aside from that, it’s the song that’s been sitting on my shelf the longest and really wanted people to hear it.

Making your first album is a huge accomplishment for a new artist – did you go into it with any expectations?

Honestly, no. I had no idea what to expect and I was scared. It got super overwhelming at times just navigating the logistics of it. I’m still overwhelmed, to be honest, but I’m also excited. I don’t like setting expectations cause if you do and you don’t achieve them, I think that’s just setting yourself up for disappointment if it doesn’t go your way.

What track are you most excited for fans to hear from Overthinking that isn’t a single?

That’d have to be a track called “The Song” it was a late addition to the album and it’s a super emotional ballad that I think people will be very surprised to hear. It let me bring out powerful and strong vocals that I wasn’t able to put on the other records. It just showcases another side of my voice.

– Play Budweiser stage in the summer!
– Open for Jon Bellion
– Have someone propose on stage at one of my shows
– Have a top 10 single on the Billboard charts
– Be able to donate a lot of money to things like climate change, clean water in places that don’t have any, and start a foundation to help kids who can’t afford instruments get access to them!
– Hang out backstage at a 1975 concert. That’s gotta be a wild time!