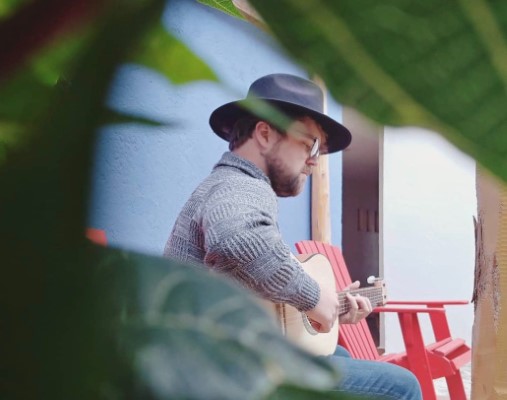 Despite the soothing atmosphere of the track, Mintenko’s songwriting does challenge his listeners lyrically. Mintenko explains,

“I wrote ‘I’ve Been Waiting’ because there are so many situations in the world that leave me at a loss for words, sometimes in a good way, and sometimes not. It’s a song that’s simultaneously meant to be a call for help, or maybe a call to action, and a comfort to the listener.”

The track was recorded at the home studio of recording engineer Chris Neal in Victoria, BC, with the additional contributions of guitarist Mitchell Green and drummer Damian Graham. Recorded over the span of a couple of days, the initial process of writing “I’ve Been Waiting” did not come easily for Mintenko:

“I had a little chord progression and a melody, but I had severe writer’s block. I sat on those two ideas for over a year. Then this September, I thought I’d better get down to it and finish the song. I then finished it in a two-hour sitting. I actually tend to lean towards the spiritual when I talk about composing and performing music. It’s hard for me to believe that my sudden inspiration was internal. The fact that I decided the song should be finished and wrote it that same day makes it feel more like deciding to go to the grocery store and buy fruit. I hope that makes sense, it feels like I grabbed the song off of a shelf.”

Check out the single below and find out more about Nick via our Five Questions With segment.

Yes! I’d love to. I’m a lover of all musical styles and practices. I started as a child by performing concert band repertoire, then as a teenager, I moved into classic rock (Beatles, Stones, Hendrix, Clapton, etc) briefly before heavily studying RnB music from the Motown and Atlantic labels. In my early twenties I fell in love with the music of John Coltrane specifically, and jazz music in general. As my twenties rounded the midway point I added a love of folk music to the mix. I’m not sure what’s left, but as my thirties near, I wonder if I’ll soon find a deep passion for EDM or something equally unexpected!

When I write music I stay as open-minded as possible, focused on inspiration and a study of the human experience. As an editor though, I try to be critical and harsh. My songs usually go through many revisions and tweaks, though there are exceptions. There is definitely a moment when the song is finished, reached its end. Some writers are like sculptors, starting with as much as possible, and whittle away to the final form. I’m more like a painter with a canvas, adding here and there, covering that up, turning this into something different, until the last brushstroke. When writing this song specifically was a service to the listener. I tried to craft it in such a way to create a relaxing experience for them.

My live performance can turn into a great laugh! I love to play with an audience and have them play with me, but the hope is that the music can still be meaningful to them. I try to take my music seriously, and not myself.

This latest song “I’ve Been Waiting”! I think it’s one of my best vocal performances and has a great chill vibe.

Yes! I’m a huge fan of Aidan Knight, I’m hoping for another release. His music is an everyday habit of mine. Marc Atkinson just released his first solo album in 12 years! This one is truly solo, just him and a guitar. It’s so beautiful. Steven Bowers, such an incredible lyricist, and song crafter. His songs feel like classics already. Jaya Bremer has released a few great spacey tracks this year! Mitchell green released a vintage swing EP last year and is following up his debut folk record with a single later in 2020. Quin Etheridge-Pedden – this is a young man with a bright future. He has a folk-pop single from last year, and this year he’s releasing his sophomore follow up full-length record. I had a sneak peek. It’s definitely a service to his artistic acumen! I should go on, but maybe I’ll suggest instead that the curious should look at the “Vancouver Island Music Scene” Spotify playlist.