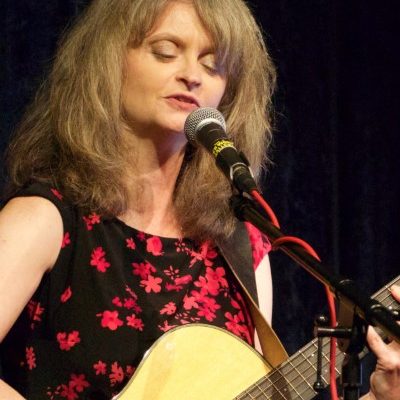 Take a few moments to find out more about Lynn via our Five Questions With segment!

I’m a Toronto singer-songwriter, active in the Canadian roots music world for more than 20 years now. I’ve been writing songs since I was 12, and see songwriting as a route to beauty and meaning in a world that can be challenging for everyone. Alongside my musical life, I’m also an ordained Unitarian minister (at First Unitarian Congregation of Toronto, which welcomes people of all spiritual perspectives including atheism). I often sing my original songs there. Once a month, I host a themed open mic called “The Bridge: Connecting Song and Spirit” now at the Tranzac Club in its fifth year.

A listener recently said I sound like a cross between Jane Siberry and The Tragically Hip, which I thought was a big compliment and also pretty accurate. My music comes from a folk/roots orientation–but it’s influenced as much by rock, blues, and jazz as it is by traditional folk. In my writing, I often start with a personal observation, or a phrase in conversation or an idea, and then take it to my guitar to try to match the mood and the feeling, and go from there. Or, sometimes it starts with a lot of lyrics in a notebook, written on a streetcar or cafe, or something that arises while walking down the street. Songs arrive in many different ways.

I’ll be releasing my sixth album, “Something More,” at 7:30 p.m. Sunday, January 26th at Hugh’s Room Live. After that, I’ll be appearing at the Winterfolk festival on February 22nd, in a solo show and also a shared songwriter stage with Lynn Miles and Meg Tennant. In my live performances, I like to make a strong connection with the audience, so that it feels almost like a conversation. I always want people to leave feeling that they’ve been inspired, uplifted or comforted…the way you’d feel after a great party or any gathering of friends.

That’s a challenging question! Today, I think I’d choose the lead track from the new record, “You Come to Me.” It’s both a love song and a spiritual song, offering (I hope) comfort and inspiration for these times which can seem pretty dark at times.

I saw Jeremy Dutcher live recently and he was stellar. Locally, I’m a big fan of Arlene Bishop, Collette Savard and the Savants, Tyler Ellis, Julian Taylor, Noah Zacharin (who produced “Something More”), David Woodhead’s Confabulation…I’m sure I’m forgetting someone!