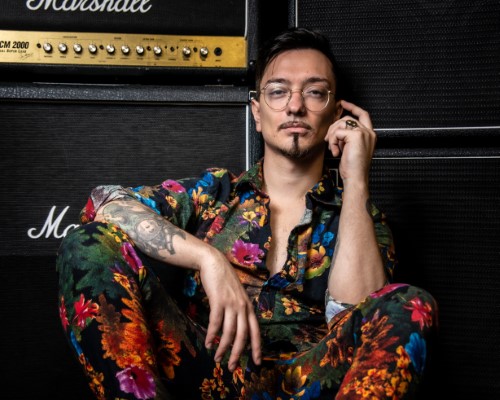 Toronto, ON’s Siggi has released a brand new single, “Better Man” with accompanying video from the upcoming album, Human Touch which is set for release in July 2020.

“Human Touch is my first concept album centered on social aspects and individual strength. A roller coaster of emotions based on human interaction and behavior.

The concept was inspired by living 5-years in a city like Toronto, multi-cultured, exhilarating and challenging. It’s not about race, gender or political ideologies, it’s about humanity. The sound and mood change in each track but still blend together, while  tapping into the one relating message: “Something is missing between one another and I try to define what it is.”

Check out the video below and find out more about Siggi via our Five Questions With segment.

I’m Siggi, I am an Italian singer-songwriter and muti-instrumentalist. I took the leap back in 2014 and made the journey from Italy to Toronto to find my place in the music scene. At the age of 12, I was already a diligent music lover and I co-wrote my first song ‘Today’. I started playing drums right after, began performing with different bands and getting my first taste of touring all through the country. Music always came as a feeling at that age, especially playing drums, it was more than anything an anger release from the provincial culture from which I was surrounded.

Over the years my need to communicate through music kept growing, so I began appreciating the beauty and understanding of the process behind composition. I got closer to great soul singers of the past like Marvin Gaye, Stevie Wonder, and Etta James so I picked up the guitar and started singing my own music.

Since in Toronto I began to devote my time to a solo career, composing songs and creating content.

I am inspired by everything that surrounds me and I’m true to myself, I don’t rush this process. I don’t necessarily need the lyrics but I need a concept. I work with that 1st harmony that runs through my head for days. I’m a self-learned musician with basic music theory, I think that too many rules can destroy your creativity. I don’t identify my music to be pop, as pop is conceptualized nowadays, but I do want it to be accessible to all generations and different music tastes. I don’t think of my music in terms of genres, but I’ve heard people mentioning: Electric, Pop, Funk, Blues; I work in the release schedule with EPs, 5 to 8 songs so that each concept is a story of its own, that leaves me the freedom to experiment. In the end, all things that are groovy and meaningful, I dig. In terms of sound, as a former drummer I love rhythm and I want it tight. Singing with multiple voices warms up my heart. The guitar blends both rhythm and harmony and It is the right form of expression for me and my voice, it just gives my sound that sexy tone. I use other instruments like Piano and Bass to influence me in different ways when composing a new tune. You’ll always find my music to be on a positive side, I think It should be an upper, not a downer.  My Debut EP “My way Around” released in April 2017 is a 5 track demo explaining my transition into a new culture and the struggles with personal independence. I incorporated some Italian songwriting influences with a more modern sound. I’m now releasing my 1st concept album made of 5 tracks called Human Touch; a true honest representation of society’s behavior and personal growth.

I am currently working on releasing more music than ever before, which requires a lot of my attention in the studio. There will be a Fall Tour coming up to promote Human Touch in its entirety. Looking forward to getting back on stage with new releases. I perform with a 7 to 10 pieces dynamic band, made out of horns, back-vocal singers and a lot of energy on stage, aspects of improvisation, tight sounds, and interaction with the crowd.

At the moment, I would say Better Man since it’s my latest release.

Since I moved here, I’ve discovered how much talent there is in Canada.

I of course always appreciated classics like Neil Young & Joni Mitchell, but I think that there are a lot of really talented Canadian musicians right now as well. I enjoy Jordan John, The Weeknd, and Michael Buble.