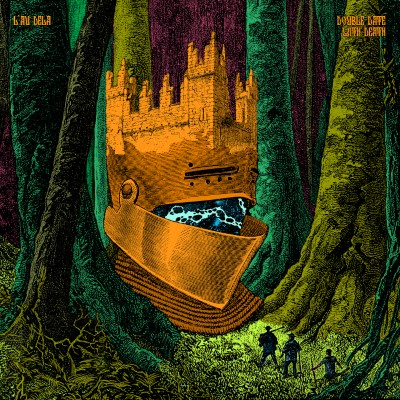 Montreal based band Double Date With Death released a new album at the beginning of January, experimenting with a bold new sound that mixes garage punk with French lyrics. I apologize in advance as I don’t speak French but I know good music when I hear it.

Which brings me to the start of the album, “Forêt”. This song is a great start as it feels like old-school punk you’d hear while down at the skatepark with your buddies on the weekend. This is a promising start to the album.

“Copier-Coller” is my favourite song on the album. The opening bassline with the catchiest drumbeat I’ve heard in years and the tone of the guitar work leading into the coolest surfer brand guitar work I’ve heard. This is the easiest song to move too.

The band released two songs as singles before the album officially dropped. “Fluorescent” is a great song, mixing well with the new age rock but a perfect influence with the music of that time frame. “Kodak” is a song I could listen to over and over as it just feels good overall. The steady melody throughout and the tone of voice of the singer is calming.

As I stated earlier, I didn’t understand most of the lyrics but you could hear the passion and soul throughout each song. The tone of the music is something I could listen to during my everyday life and not even realize that I don’t speak the language they’re singing in, even though there are bits of English throughout.

If you’re looking for something new and unique, but with a hint of something punk classic, check this album and band out for sure.