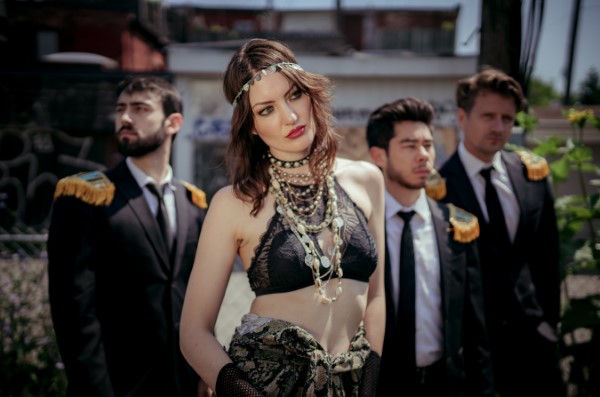 Simpson was diagnosed with epilepsy ten years ago.  At its worst in the early days, she was bed-ridden, needing constant care, enduring six major seizures a day. It meant giving up everything, including her modeling and music careers. With an effective treatment plan put in place, along with the correct medications, she now has 90 percent fewer seizures than she had at the worst stages of the illness.

Even though she still struggles and has had seizures both in rehearsals and onstage during shows, she is undaunted in her commitment to Neon Bloom, to creating and performing music and entertaining audiences. The audience often knows this back story and Simpson said she often speaks with people after shows who say they feel inspired by her bold and badass approach to life – not letting her chronic condition impinge on her zest for life or creative spark.

“At the time, when I got sick, it was super strange to be an adult and be that debilitated and go through something like that. But, for me, it’s a big part of how I write lyrics, and why I write lyrics and how I see the world. And it impacts our performances. Every show is a celebration for me. There was a time when I was scared, sick and penniless. I lost my husband and had to move back to Toronto and now I just want to celebrate how far I have come and how amazing it is to be in this band with these guys. Every show is the best feeling ever,” said Simpson.

Her bandmates have learned how to help her through her seizures and are continually amazed at Simpson’s courage, resolve and unwavering commitment to do what she loves – to sing, to write and to perform music with pure joy and an almost reckless abandon.

“It’s A Crime” originally appeared on the band’s debut EP, First Fever, but they loved it so much they decided to remix and re-release it as a single and as part of the upcoming EP.

“The video for “It’s A Crime” was shot while we were on tour in Prague in the Spring of 2019,” said guitarist Fred Yurichuk. “We spent several days running around the city and sight-seeing, while simultaneously choreographing fight scenes and filming them. Since the scenes were shot in public, many concerned onlookers would stop as soon as they saw three men fighting one woman in a frenzied fashion. There were some concerns expressed, but once they saw the camera, people would get into it and start clapping at the end when Jen would beat everyone up”.

Check out the video below and stay up to date with Neon Bloom via their socials.