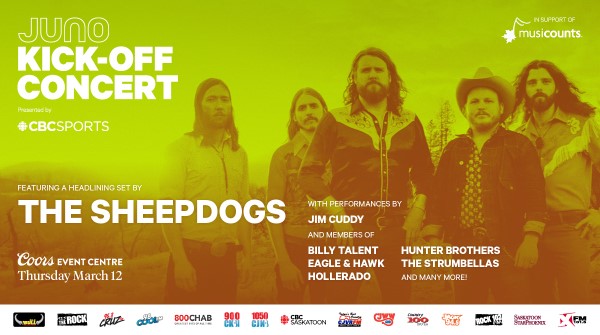 Saskatoon is set to welcome the country’s music community with the JUNO Kick-off Concert, headlined by hometown boys, The Sheepdogs.

Presented by CBC Sports and taking the stage of Saskatoon’s Coors Event Centre on March 12, the JUNO Kick-off Concert is held on the eve of the JUNO Cup charity hockey game, in which pits hockey’s greatest against Canada’s music elite.  Joining the Sheepdogs for a night of classic Canadian covers and collaborations featuring Canadian Music Hall of Fame inductee Jim Cuddy, members of Billy Talent, Splash’N Boots, The Strumbellas, Eagle & Hawk, Hollerado, and Saskatchewan’s own The Hunter Brothers. Additional artists will be announced as the event draws closer.

Tickets for the JUNO Kick-Off Concert are available at Showpass. All proceeds from the event support MusiCounts, who support the next generation of Canada’s music makers through music education in their communities.

The 2020 JUNO Awards and JUNO Week will be held March 9 through 15 in Saskatoon, SK.  The JUNO Awards will broadcast live from the SaskTel Centre on March 15 on CBC, CBC Radio One, CBC Music, the free CBC Gem streaming service in Canada and globally at cbcmusic.ca/junos.