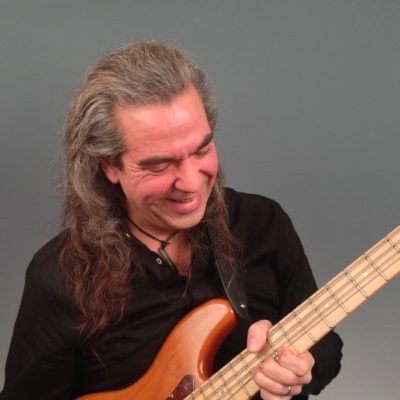 Ontario’s own award-winning singer-songwriter, performer and multi-instrumentalist Ed Roman is back with an official lyric video for his single, “Stronger” from his upcoming album.

Check out the video below and find out more about Ed via our Five Questions With segment.

Ed Roman.  When my people first came across your star in an oblong orbit in the dark rift of the galaxy you call the Milky Way, we were immediately drawn to your strange position almost like noticing license plates from a different country. We were immediately drawn to the low density of your star and the blue sphere you call earth. It was here that we were able to find stable gravitational momentum with our crafts as a result of your electrical grid and nuclear-generating stations. Not to mention your sphere has a magnetic core that symbiotically works with the rock strata of your globe, which makes gravity amplification for us a cinch. Without warning, I was left here in exile as a result of the crimes of speaking out against the galactic council in regards to their allotted destruction of certain galaxies to make more room for super burgers. My allotted penance was to collect as much information as possible and then succumb to the elements of the planet in a timely fashion. My integrated biothermal cerebral cortex chip will be later retrieved by the company for further downloading. My Name Is Solon …..

Actually… I am Canadian musician Ed Roman. I’ve been making music and writing songs and telling stories since 1985 to the general public and the world at large. It’s an absolute pleasure to speak with you today and I thank you for the opportunity.

Ed Roman. The method is no method.. other than listening to the information and assisting it as best as I can.  That’s my job. I am a reflector not only of my living moment but the day and age that I live in. It’s intermingled with thinking, feelings, and ideas from 100 years before this timeframe and looking into the future multiple generations. I love countless genres of music and as a result, the coolers textures and tambours of the things I write seem to be intermingled together in a kitchen sink effect. I think it behoves us in any practice or discipline to keep an open mind about the things in front of us. It can be prosaic and clinical to methodize anything that anybody does as a result of the dogmas we carry with us. Life is forever changing and as a result, needs to be followed and ridden like a comet. You just have to know when to jump off and grab the next one…

Ed Roman. At the moment I am on the precipice of a release for a whole bunch of new material from a new project entitled “A Recipe For Perpetual Spring” The single is coming out for pre-sale on January 10 and I’m very excited to bring this new material to people. Over the next number of months, I’m planning on putting together some shows for the spring and summer of 2020.  The shows that I put on, whether they be solo or with the incredible group of musicians I’m lucky enough to play with, are very much like watching the 57 Chevy blow up in your kitchen while a gargoyle tells you stories.

Ed Roman. That’s a great question and as simple as it is…  it’s extremely complex.

Music and art for that matter is so subjective. Sometimes it is defined by certain moments in our lives. It stays with us as sort of a security blanket and references our youth or moments of fecundity in our existence. There are times we use art to push us into other realms of feeling. On a beautiful sunny day, we might have the windows down and be listening to something that may push our accelerators just a little further.  Moments in our lives sometimes intermingle with art to help us understand our emotional conditions and offer a greater sense of philosophy and a more expansive spectrum of personal growth. If there was any song I would suggest, I would say “what is it that makes you feel something”. How am I to tell…..? All I really want to see you do is to feel something and think about it.  If I’ve done that… then that makes me happy .. because it makes you feel and think something.. I want it to be your own.

Ed Roman. Canada is a breeding ground for so many different kinds of art forms. I am staggered at the magnitude, complexity, and resources of artful minds and passionate free thinkers that this country has produced.  as I mentioned I like a lot of different kinds of music and usually those that are pushing the proverbial envelope tickle my fancy. Kevin Breit is one of my more favourite Canadian composers and guitar players. I’ll liken him an amalgam of Django Reinhardt meets Jimi Hendrix meets Tom Waites stir-fried with a little bit of Pee Wee Clayton and Brian Eno. Not everybody’s cup of tea but definitely somebody who is received an incredible amount of recognition for his work and artistic abilities. Again I must thank you so kindly for having me today and it’s been a pleasure to be able to speak with you.

You’ve made my exile here on the globe that much more pleasurable and I thank you for the information.