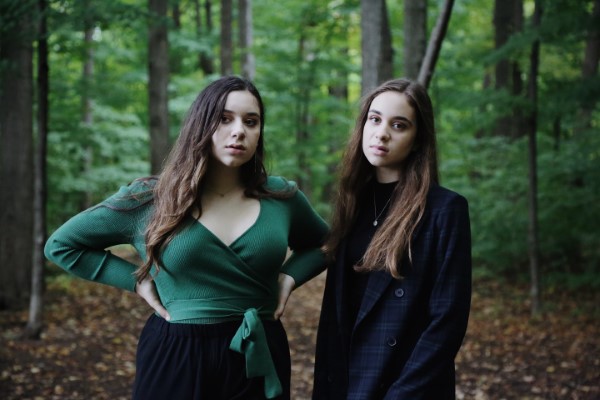 Markham, ON-based sister duo, Caardia is made up of Annie and Celia Siriopoulos. The two have released a video for their brand new single, “Walking Away”.

During the process of writing and filming Walking Away, it all came from something very personal to Caardia. To start off, they knew that they wanted this song to be easy for their audience to relate it in regards to whatever personal experiences they have had, and wanted this song to be open to interpretation. For them, they based this song on having someone really close to them result in a toxic relationship and finally coming to terms with the fact that they are not right for them. Not just literally but also metaphorically they are expressing Walking Away from them. For Caardia, they based it on bad friendships that they had but again can be put up for interpretation by the listener, depending on the person who has influenced their lives in various ways. If you listen to some of the lyrics in the song and mostly in the verses, it sounds like they are singing to someone directly. This is due to the fact that they wanted the song to come across as a direct message to that person as a way of telling the world how they feel. This song was a way to do exactly that. When they finalized the song, they knew the video they were going to film had to be very minimalistic so the audience could have an opportunity to connect with the song. They knew they wanted the video to have a darker and deeper feel to help express their emotions and connect with their feelings they felt when writing the song. The environment they filmed the music video in gave them the vibe they felt correspond perfectly with the song.

Check out the video below and find out more about Caardia via our Five Questions With segment.

Care to introduce yourself to our readers?
We are Celia and Annie Siriopoulos from the alternative-pop group Caardia. We are from Markham, Ontario and have been singing since we were young. We have always enjoyed the process of making music, and find it freeing to express emotions through music while giving others the opportunity to do the same with our music. Creating these songs and making a piece of our own is something we have so near and dear to our hearts, as we both can relate to what we are singing about in a different way. We constantly unconsciously harmonize with every song we hear, and have a never-ending desire to make more music with meaning and giving listeners the ability to relate to the messages we are portraying.
Tell us a bit about your music and writing style.
Our music is alternative-pop, which is a mixture of a little bit of technology with an alternative feel. When writing, we write about current issues in the world, as well as in our own personal lives, in hopes of connecting in one way or another with the listener. We want to start with a solid foundation of what is important and meaningful to us, and what makes us tick. When we started our first EP, The Deep End, we decided to write about issues such as bullying, society’s dependency on cell phones, finding yourself, and fake news. All of these messages were prominent at the time, and still are today. Some of these issues, such as bullying, we faced ourselves when we started singing professionally. Now, with our newest single and music video, Walking Away, we have been able to express to our listeners that when in a toxic relationship, after trying to make it work, sometimes you just have to walk away. We left this song open for interpretation, as everyone has their own personal stories and experiences that allow them to relate to the lyrics and mellow feel of the song.
Do you have any upcoming shows? For someone who has yet to see you live, how would you explain your live performance?
We just finished a very busy holiday season full of shows all around the city such as the Toronto Christmas Market at the Distillery District, and are excited to start the new year with a lineup of shows on their way. As of now, our biggest event is a fundraiser called “We Sing to Cure SPG50”, as well as at local restaurants. To describe our live performances, I would say they are engaging to the viewer due to the emotions and excitement we have when performing a song, as well as a true connection to us and what we are singing. We feel as though we can relate to each song in a different way, and whether it is upbeat, or a slower tune, we always find a way to get the crowd engaged. We love to tell stories through our music and sing the songs with emotion like they are our own.
If you were asked to suggest only one of your songs for someone to hear, which would it be?
If we were to only pick one, it would be our new song “Walking Away”. We feel as though so many people can relate to this song, and look to their own personal experiences to know they are not alone. Whether it be with someone in a romantic relationship, a colleague at work, or a friend, this song was written as a direct message to all of the people who have put us through toxic relationships, and how it is best to just walk away. It is difficult to pick only one song to suggest though, as every song appeals to a different demographic facing different issues. For example, we would recommend a child experiencing bullying to listen to “No Breakdowns”. That is why all of our songs can be interpreted in many ways for the listener, to make it relatable and catchy the same time.
Canadian Beats is all about Canadian music, so who are your current favourite Canadian bands/ artists?
We love Alessia Cara’s beautiful voice and amazing messages and started off our singing when we were young by performing Alanis Morissette. We also love listening to The Weeknd and his unique style of music. From the alternative genre, we like Arcade Fire and have currently been obsessed with Lennon Stella. Leonard Cohen has also always been a classic we have listened to since we were young, and we grew up listening to Rush.