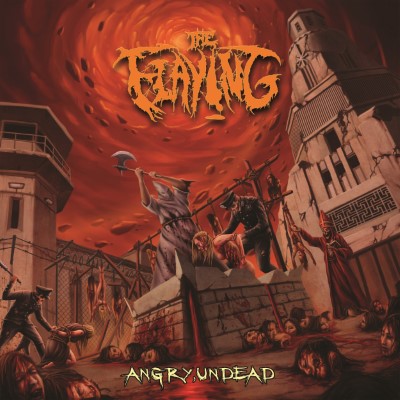 THE FLAYING, a death metal band from Quebec City, Canada released their second album Angry, Undead on March 22, 2019, via PRC Music. Working with Christian Donaldson (Cryptopsy) at The Grid in Montreal, QC, the band has manifested pure mayhem for their fastest and most brutal debauchery to date.

They released their latest music video “Place Du Parvis” a visual chronicling of the love the band have for the downtown core of their hometown. You can check out the music video down below and what the band had to say about the video.

“‘Place du Parvis’ is an important hub in Quebec city, the hometown of the band. This very lively place sees all social classes living side by side, for better or for worse. So by making a video about this place, we had to avoid making it with a static approach.

We adopted a street approach to enlarge our vision of the traditional vocal play through and to respect what the song is all about. We went rogue and roamed the streets to do so, where it all began years ago. We had some studio shots of [vocalist] Will [Murray] singing his parts and did all the backing vocals as a team, street choir approach. It truly gives a unique perspective for a death metal video.”

The concept of “Angry, Undead” is an intricate one with each of the eight songs falling under a distinct axis: Chaos (social manifestations); Madness (individual manifestations); and Void (existential manifestations). It is brutal, instinctive, unique, and wicked, and is recommended for fans of Cryptopsy, Archspire, Suffocation, and Deicide.

You can now check out “Angry Undead” HERE.