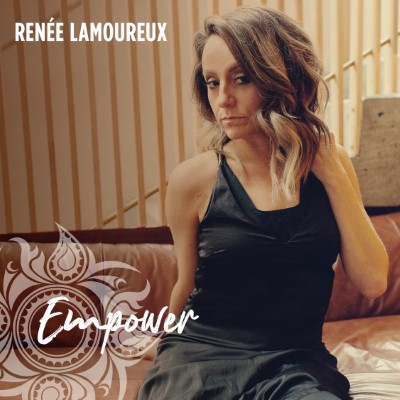 Award-winning Indigenous artist Renée Lamoureux is celebrating the release of her new solo record Empower with a release party in Winnipeg on January 3.

The pop-country songstress describes her sound as “music that motivates” – her previous solo album “Dare To Be You” won her Best Female Artist in 2016 at the Manitoba Music Awards, and was up for two Indigenous Music Awards for two consecutive years in a row. Her single “Two Step” hit at #1 on the Indigenous Music Countdown.

Before going solo Lamoureaux toured with her former band, Keith and Renée. The duo released six albums and toured with major artists such as Jann Arden, Dean Brody, and Dallas Smith – before she made the transition to a solo performer. Through all of this Lamoureaux was fortunate enough to contribute her philanthropy work with WE Charity (Free The Children), performing at WE Day and in countless schools across Canada.

We caught up with Renée Lamoureux to talk about her solo career, her charity work, and her new album Empowered.

Tell us about the transition from Keith and Renée to your solo projects.

The transition was a great opportunity for me to grow personally as a performer. For 15 years, I was always on stage as a duo, making music and decisions as a duo. The transition to solo artist was huge — it gave me the chance to tune inwards and ask big questions like who am I as an artist and what do I want to say? Why is it important I start a solo career? It allowed me to discover a new voice – my own – and explore an unknown path. An avenue to further expand my writing skills and creativity.

You’ve toured with some major Canadian names – what have you been able to take away from artists like Jann Arden or Dean Brody as performers and songwriters?

Touring with both these artists was a major privilege and so influential to my music career. I was honored to have been a part of their tours. Jann Arden was my musical role model growing up so when asked to go on the road with her, I actually cried. I was so excited. She also asked that we sing a song with her every night and I thought I was dreaming. It was quite a surreal experience for me. I learned so much from Jann from not only watching her amazing shows and listening to her banter with thousands of people every night but also how she interacted with everyone behind the scenes. She was always professional and incredibly considerate of everyone. I respect her tremendously as she is a genuine and talented human.

You’ve also performed on WE Day and worked closely with the organization. What has that meant to you personally and professionally?

Being a part of WE Charity for a few years was an unbelievable experience. It was my first direction introduction to the massive inequalities that exist in the world today and was the impetus to getting involved with work to help make a difference in our world community. It expanded my life knowledge and opened the door to many places and experiences in the world that I likely would never have had the chance to explore. I know that it increased my desire, compassion, and empathy – I wanted to reach out and help others where ever and whenever I could — whether that was going overseas building schools or staying connected close to home and making a difference in my own community.

You’ve described your sound as “music that motivates” – tell us about what motivates you to make the type of music that you do and how being an Indigenous artist is a part of your story.

For my last album ‘Dare to be You’, I found myself gravitating towards creating positive and upbeat music and lyrics. Before I’d often write heartbreak ballads, therefore, I wanted to challenge myself creatively and take on a new adventure. The outcome on that solo album was songs that motivated and uplifted me, which I personally enjoyed. I think that part of the reason for the nature of the music was that I know that I can be my own worst critic. The music was my way of telling myself – you can do this!!

Being an Indigenous artist has provided me with a new platform and unexpected direction in my music career. I am French Métis but aside from acknowledging the title, I really didn’t know much more than that growing up. As a young child, I always knew we were Métis but my mother never taught us the story as I believe she herself didn’t know the details of our family history.

We always identified as French Canadian but now as an adult, I’ve learned that many people (not all) in the prairies who identified this way are actually French Métis. A couple of years ago, I decided to return to university and work towards a degree. Part of the reason is I wanted to take Indigenous studies to learn about my ancestors and also the details in how our nation was shaped. I wanted to educate myself with accurate information in order to be a strong voice and ally to all Indigenous people of Canada — to understand the impacts of colonialism, systemic discrimination and the carry-on effects that are manifested today.

Not only am I completely enthralled with all that I have learned to date, surprisingly all of this new knowledge is what helped to shape my new album, Empower. I never thought going to school would generate lyrical material. I love how music can take you to so many places. When I look back at my 20-year music career, I see there have been various unconventional routes which I think is really cool. I like to think outside the box, stay open for the ride and see where it takes me.

With the release of Empower you’ve cultivated a collection of stories and lessons you’ve learned, and musically it’s a really fun and dynamic sound. What was the process like putting this album together?

Thank you! Right now I’m into making fun albums and I’m rolling with that.

I seem to release an album every 3 years or so. I unintentionally started writing Empower right after I released Dare to be You. I found that my creativity continued flowing and I never stop that process or take it for granted. I find that often many of my ideas will appear when I am out and about in the world living life, and they present themselves to me at the most inconvenient times. I’ll have to immediately step away for a moment to put the idea down in my iPhone recording app since the ideas leave my mind just as quickly as they come in. The starting stage of Empower was written in this process. I also had Murray Pulver produce my third album since he is so talented and always gets what I want. It’s easy to work with someone when they get you as an artist and also is a great co-writer and Murray has all of that!

Writing Empower is the cultivation of many of my personal life lessons as well as celebrating the beauty and love that encompass my surroundings over the last three years.  From coming to terms with entering my fourth decade of life and discovering an inner challenge to being a proud aunt of six amazing nieces and nephews. Creating the album forced me to reflect on some tough personal choices made and also sit back and be in awe of the simple beauty of life. Every album written has been an opportunity for me to grow and to be better as a person. You often hear artists say that music is therapy and I truly connect to that. I love to have an outlet – to pour my emotions and feelings onto paper, create a melody and then get to sing it out loud. The ultimate hope is that someone listening connects to the music and that it brings them a sense of relief and joy. I have a couple of songs that illustrate the message that anything is possible no matter what age you are. ‘Never too Old to Live’ and Stay Young Forever’. I do believe people of all ages should be free to create and express their artistry as they desire.

And you have your album release coming up on January 3. Tell us a little more about the night and where Manitoba fans can get their tickets.

I’m really looking forward to playing this show with my band to a room full of wonderful hometown folks. I’m always grateful to be able to sing music for a living and that people come out to hear me. I’m excited to play all the new songs off Empower, tell stories on how they were created and sing some of my favorites from the past too. It’s gonna be a fantastic night and just a fantastic way to kick off the New Year!