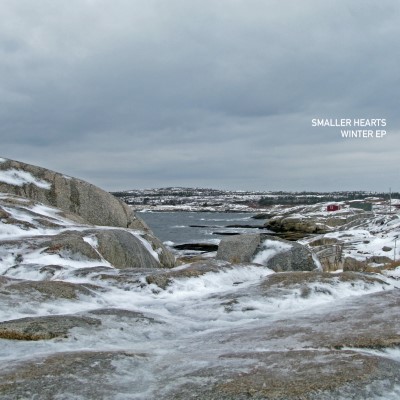 Winter EP is the newest EP from Halifax based band, Smaller Hearts.

Winter EP is a cheery little sample of the band, only three songs long.

The first track “Possible Futures” sounds like the soundtrack to a classic atari game, complete with electronic drums, samples, and even laser sounds, if those cartridges could also contain the data for uncompressed bouncy female vocals. As the title implies, the track is futuristic as the lyrics detail what appears to be the attack of a battle from our possible selves from other dimensions to take control of our possible future  – so of course, on concept alone, it had to be my favorite of the bunch.

The second track “Snowsmashed” is a much more soothing, gentle track, but with an edge of anticipation. To do this, the song uses a droning baseline with a heavy, slow drum beat, which it lays soft, echoey male vocals, and light clear tones. The dissonance of this soundscape makes for an interesting abstract listen.

The last track, “Christmas at Home,” as the title infers, is a sweet little Christmas track. Similar to ‘Possible Futures,’ the track layers female vocals onto what sounds like a classic game cartridge sound. Less of a battle, this song is a cheery sincere song about the band wanting to spend “Christmas at Home.” It’s not often I get to hear independent artists experiment with the holiday genres (how can we expect to compete with the titan that is Mariah Carey), so this was a very pleasant surprise for me. One could say it made my small heart grow several sizes this day? Or is that too cliche?

Overall, it is a fun little sample of the band’s current state of evolution. I look forward to seeing how the band grows over the seasons.