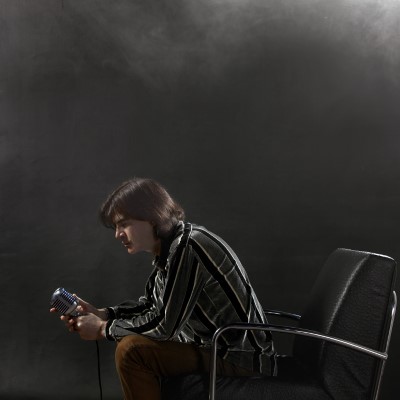 Canadian singer-songwriter and screenwriter Pennan Brae has released a video for his newest single, “Strut-1980s”, fresh from his film release and accompanying soundtrack, Gravity: The Astronot — a remix of sorts of Brae’s previously released The Astronot — available now.

Brae felt the itch to do a music video, and this is the one they chose.

“Tim and I went with the single ‘Strut-1980s’, which pursues an 80’s musical theme,” Brae explains of the new showpiece. “We accompanied it with a visual theme from that decade with lots of bright colours & fun themes.

It was a blast shooting this. I drove nine hours from Vancouver to Bend, Oregon and we began filming the next day. We shot it in the desert with pink flamingos, and the colour pink plays a large role in the story.

And I love the mix that producers Kirk and Eric created…it’s my favourite musical piece on the album.”

Check out the video below and find out more about Pennan in our Five Questions With segment.

My name is Pennan Brae & I’m a singer-songwriter & screenwriter in Vancouver. In 2019 I released my 5th album, ‘Gravity’ from ‘The Astronot’ feature film, which I wrote, scored & acted in. It screened in a number of film festivals on the 2018/19 circuit. We hope to have it streaming online in early 2020. The trailer for ‘The Astronot’ can be seen here.

In Dec 2019, I released a new music video for ‘Strut–1980s’, which is the lead single off ‘Gravity’. It was a blast to shoot & aims to be a musical & visual time portal to the Eighties. The track was mixed by producers Kirk Kelsey & Grammy-nominated Eric Alexandrakis. It was then mastered by Grammy-winning engineer Sean Magee at Abbey Road Studios. The music video can be seen here.

Also in 2019 I released my second feature film called ’2 Below 0’ which I wrote, scored & acted in. It’s currently on the 2019/2020 film festival circuit. I shot these 2 films & music video with director Tim Cash of Far From Earth Films in Central Oregon. I love his filmmaking style & storytelling abilities with the camera. The trailer for ‘2 Below 0’ can be seen here.

My music is influenced by artists from the 1950s to the 1980s, especially The Rolling Stones, Beatles & Eagles. On ‘The Astronot Soundtrack’, I employed a lot of new instruments such as the violin, cello & pedal steel guitar. I worked with a lot of great musicians in Vancouver & recorded at a great studio called Blue Light Studio. On the 2 lead singles, ‘Walk With Me’ & ‘Crashland’, I got to record with legendary drummer Steve Ferrone & INXS bassist Garry Gary Beers. That was a huge honour.

In February 2020, I plan to release the soundtrack for ‘2 Below 0’ which will be entirely guitar-driven. I’m excited by that album as it will be the most classic rock-influenced work I’ll have released to date.

We’re currently rehearsing the soundtrack for our ‘2 Below 0’ film which we plan to take live March 2020. We’ll also have tracks from ‘The Astronot’ in the set which will include both upbeat rockers & slower ballads.

‘Crashland’ off ‘The Astronot’ soundtrack. It has a dirty guitar riff off the top which broadens into a nice melody in the chorus. I wrote the track with Eric Alexandrakis. It was then produced by Paul David Hager & mastered by Grammy-winner Emily Lazar.

My favourite Canadian band is The Tragically Hip; they are simply the best. I also love Platinum Blonde & Honeymoon Suite from the 1980s. Bryan Adams is incredible it goes without saying. & Neil Young is otherworldly; it’s hard to put into words how great he is.