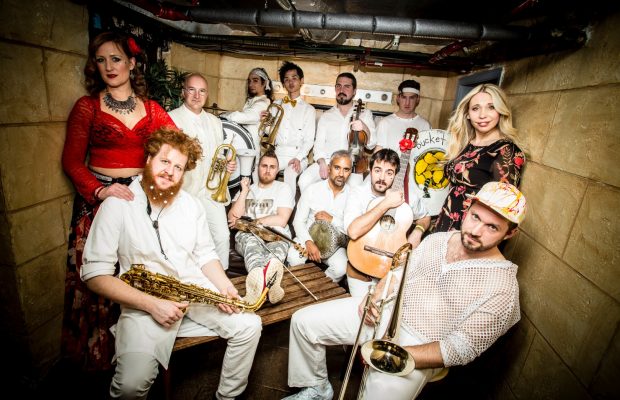 The group – who rose to fame in 2012 when a video of a delayed flight performance went viral- is comprised of Ian Tulloch, Os Kar, Marichka Marczyk, Michael Louis Johnson, Julian Selody, Jaash Sing, Alex Nahirny, Mark Marczyk, Stephania Woloshyn, Nathan Dell-Vandenberg, and James McKie. Their talents have taken them across Canada and internationally, thanks to their dynamic and immersive live experiences.

Lemon-Aid promises a night of music and giving back, in the name of the holiday spirit. Toronto musicians will join the group on Friday, December 27 and Saturday, December 28 to raise funds for international non-profit organizations chosen by the artists themselves. Each band has graciously agreed to donate half their fees to a charity of their choice, making the event the most dynamic fundraiser of the season.

The event features two-day passes as well as early-bird deals. For Lemon-Aid tickets, visit the Official Facebook Page. More information at the bottom of the interview.

On top of this awesome news, one of the bands that will take part in the event, Nascent Ukrainian electro-folk heroes Balaklava Blues has unveiled a video for their single, “Don’t Leave Me”. The video, set to “Don’t Leave Me,” a song based on the lullaby said to have inspired Gershwin to write Summertime, was shot over 3 days in May 2019 and captures 79 of the city’s most iconic murals painted over the past 5 years. The video was shot by Oleksandr Fraze-Frazenko and edited/post-produced by Volodymyr Nevelsky according to the concept and vision set out by Olga Chertkova, Mark Marczyk, and Marichka Marczyk.

How did the idea for the first Lemon-Aid festival come together?

We wanted to give artists in our community a platform to support the organizations that are important to them. At the same time, those that know us know we like to celebrate and one night just didn’t seem like enough time and space for the amazing artists that are coming out of our community.

Tell us about the other artists at this year’s event – what can we expect?

Balaklava Blues – LBO lead singers who met and fell in love during the 2014 Revolution of Dignity in Kyiv explore their trauma and inspiration through the lens of EDM-infused thousand-year-old songs. Think Dakha Brakha remixed by A Tribe Called Red.

Bangerz Brazz – an east-end hip hop brass massive who brings the party with original lyrics over heavy live arrangements of some of your favourite instrumental hip hop tracks of all time. Like The Roots with MOP leading the charge.

Moskitto Bar – a musical journey from Baghdad to Brittany through Ukraine, Algeria and the Balkans. This band could only have been born in Toronto and it makes us feel how incredible it is to be alive and together in this city. Not sure I can compare them to anyone.

Can you tell us about any of the charities chosen as recipients from this year’s show?

LBO chose Regent Park School of Music. It’s a community music school that gives as many kids as possible a music education by removing financial obstacles. This year, they gave 1,000 young people aged 3-18 a highly-subsidized quality music education at their central hub in Daniels Spectrum in Regent Park and in Jane and Finch and other high-priority neighbourhoods in Toronto.

The goal is to help kids thrive through music; the study of music allows young people to flourish creatively, personally and academically, enriching their lives and prospects. http://rpmusic.org/

Balaklava Blues has been working closely with Help Us Help for many years. The Canadian volunteer-run organization has been providing relief to orphans in Ukraine for the past 25 years. Mark, Marichka, and Oskar have personally travelled to and volunteered at the Help Us Help camp in the Carpathian Mountains and have seen first-hand how the organization’s work has a positive effect on the lives of parentless children in a country where they are otherwise neglected and don’t have government support or services to protect and nurture them, never mind giving them what they need to thrive. https://helpushelp.charity/

Bangerz Brass is donating proceeds to RISE Edutainment. Reaching Intelligent Souls Everywhere (RISE) is a youth-led movement that has been providing opportunities and spaces for youth to develop artistically/professionally, personally, socially, and spiritually. They create safe and inclusive spaces that foster self-expression and healing through the performance arts and storytelling. The organization has provided a place for Bangerz MCs and countless other young artists in the Scarborough community and beyond a safe space to heal, build community and work on their craft.

Moneka Arabic Jazz started working with tuktuk4freedom as they wanted to do their part with regard to the protests in Iraq. They sell hats and send all the proceeds to Iraq, but it’s more than just a fundraising organization. The aim is to raise awareness and to provide English language coverage to the movement back home.

For fans who haven’t seen Lemon Bucket Orkestra perform – what can they expect from a live show?

It’s a show. But one that won’t feel like a show by the time it’s over. You’ll go home arm in arm with love in your heart and a smile on your face wondering when the shift happened, but then you’ll catch echoes of “peace” screaming through the midnight streets and decide it doesn’t matter.  That’s a lemon bucket night.

What do you want everyone at the shows to take away from Lemon-Aid this holiday season?

Cherish one another. Give generously and widely. Celebrate what we have. Together.