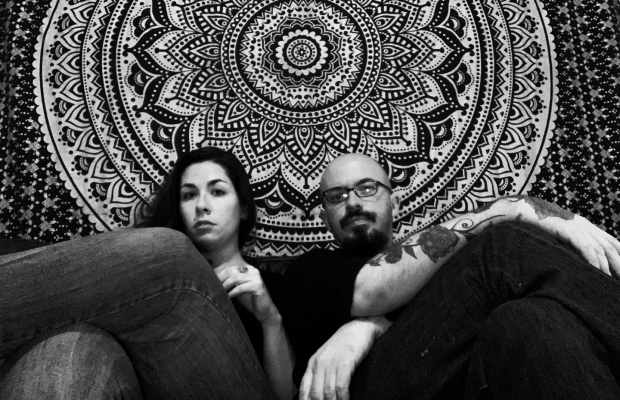 The brainchild of Montreal-based musicians Patrick De Marseilles and Miss Marie, the band and their forthcoming debut Astrophysical — set for release early 2020 — takes listeners on “an exquisite plunge into personal divinity and the ties that bind and divide” they say.

Check out “Rum Runner” below and find out more about the band via our Five Questions With segment.

Yes – Black Arcana is an alternative project started by myself, & my partner in crime Miss Marie. It really started as something of a studio project – experimenting with the Alternative genre, incorporating a garage rock ethic into a more refined style of production and song composition. What it’s come down to is taking almost a trip-hop approach to production in the studio – layering beats, synth, what-have-you, then opening up a Marshal & putting down guitar parts over that. I’m a big fan of riff-rock – just a good, clean guitar part over a good groove. Anyway – when I get Miss Marie into the studio to add her vocals, it gives the entire tone and texture of the tune a different vibe – she’s got this great, natural vocal style that tends to complement whatever I’m bringing to the table that way. But hers – it adds a sweetness, and I guess a pensiveness in a way.

I guess I’ve covered that a bit. Really, this started as more of a garage rock project. Both Miss Marie & I are fans of garage rock, or blues rock, whatever you want to call it. And I was writing a bit in that vein – riff-heavy noise rock. And I dug it, but I wanted something more. I was hearing something else. I’m a fan of the trip-hop style of music that came out of the 90s, and I wanted to incorporate the two. I liked the idea of more of a refined groove – instead of just banging out tunes, to really funnel all of that energy into more of a stylized product. I find you can sort of bottle that intensity – to bring that to a recording process that incorporates it into a larger product. Somehow it is almost more palpable that way.

So, that’s how this really evolved. It starts with a really amorphous writing process for me. There is really nothing strategic about it at all. I’ll hear a hook, or a groove – a lyrical motif. I’ll record it – I always carry some kind of recording device around with me. After the initial ideas come I’ll fill in any details. Really – most of the songwriting occurs randomly, as I’m walking around – doing whatever. The song is essentially written before I pick up an instrument. Once I get into the studio that’s where I start to find sounds to duplicate what I’m hearing. I like – on the one hand – to take almost a DJ’s approach to that – layering tracks, crafting grooves. Then I bring the guitars into the mix.

We’re finishing up work in the studio before we start to schedule more shows. Really, our live performance is both intense and in its way really groove-based. It’s all about the groove for me when it really comes down to it. To start with this deep, intense groove, layered with Miss Marie’s lingering vocals, and then bring in an amped out guitar into the mix – well, it’s a beautiful kind of intensity – heavy honey for the soul I like to say.

I would say to start with Rum Runner. It’s the first song off of our upcoming EP, and it’s really the first song I recorded in this vein. It is the first statement of what this band is. After that, they can explore the EP – I’ll be previewing songs via blackarcana.com, and posting the release date of the EP as we get closer to completion.

I actually dig some of the girl-bands out there. Indie bands like the Beaches, or the Montreal band Les Shirley. Good, guitar rock.