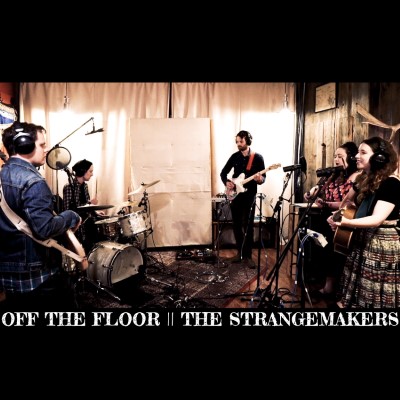 Off the Floor is the newest album from Toronto based band, The Strangemakers.

Featuring powerful female vocals, harmonica, acoustic & electric guitar, bass, and drums, Off the Floor is an album overbrimming with sincerity and energy. Not shy to introduce itself, the first track of the album starts with a boisterous accompaniment and chorus designed to lure the listener to sing along. That seems to be a common feature of ‘Off the Wall’ overall as almost every track features choruses so simple, yet so full of emotion, it’s hard to not feel the invitation to join in. This appealing feature fits well with the Strangemakers’ self-proclaimed mandate touted in their press: that they are “a roots-rock band determined to see you have a good time.” The Strangemakers seem determined for you to have as much fun as they are having making this album.

A standout track for me was “Lullaby.” The song starts as the title implies, as a simple Lullaby with two harmonizing vocals to a simple guitar to a swaying beat. The song then evolves as the emotion swells as the whole accompaniment joins in to build the band’s full song. The shift intone fits well with the song’s lyrics of a parent expressing their intent to keep their child safe, yet (at least now) ignorant of the hardships of the world — a burden they’ll happily shoulder out of site for the sake of the child’s wellbeing.