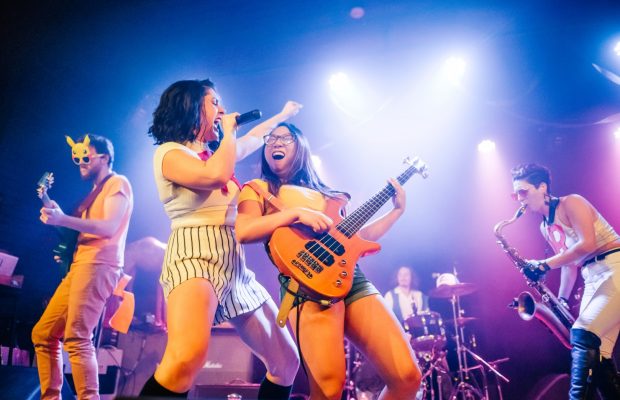 Vancouver, BC-based funk-rock group, Raincity has released a video for their single, “Give This Up”. The video serves as a teaser of what’s to come when Raincity makes their Commodore Ballroom debut opening up for funk legends Five Alarm Funk on December 26th.

“Give This Up” is from the group’s self-titled EP, which was released in June 2019.

The “Give This Up” video was recorded in one day with directors Wayne Chung and Bailey Wood and a crew of about 45 people. The video was filmed in an elevator that was made and torn down in two days, and most of the extras are close friends of the band which gives the video a fun party-like vibe.

“’Give This Up’ has been with us for a long time, back to the jazz trio days of 2016,” says Raincity vocalist Clare Twiddy. “It has changed so much, in reflection of the ways that we too have changed. Over time, the song came to describe the freedom that we found in letting go, in embracing ourselves, finding confidence in our voice, and striving to be the ideal self. The fun and energetic video for ‘Give This Up’ embodies that freedom and embrace during a time where many people may need a reminder to love themselves and to look for the joy in life, family, and friends.”

Check out the video below and find out more about Raincity via our Five Questions With segment.

Our music is an amalgamation of many things, from in-your-face, hard-hitting funk/punk, to vibe-y and atmospheric jazz/RnB. Nothing is off the table for us. Most of the writing process starts with jams all together, and from there, things seem to just roll along.

It’s a sweat-inducing, high-energy Atomic Dance Party! We’ll be bringing our A-game and then some to the stage of the Commodore Ballroom on Dec 26th, warming up the audience for Small Town Artillery and Five Alarm Funk. And on January 18th, 2020 we will play one of our favourite Vancouver spots Guilt n’ Co.

Check out our single ‘Give This Up’ and it’s new music video that just came out. It gives a pretty good idea of our care-free, explosive approach to music and performing.