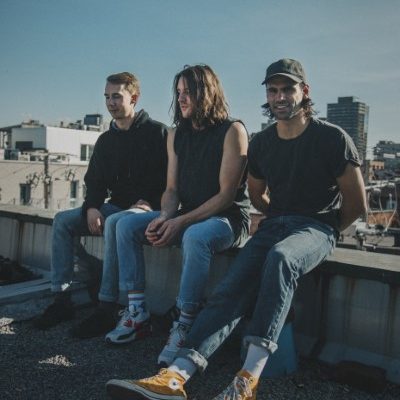 Montreal, QC-based death-pop rockers Skeleton Club is made up of Andrew Matthews, Christmas Anglin, and Morgan Zwicker. The three released their album, Death, Love & Money on October 10, 2019. The 3-piece band has garnered 50,000+ streams within two months of the release, which is quite an achievement.

“I wanted to make this record with a really wide range of sound, I wanted to be able to bounce around genres, but also have a consistent lyrical theme.

A lot of our influences are artists who also produce their own music, or are very involved and hands-on in the making of their albums. This album is self-produced; the sonic part is really important to us, and we wanted the album to be glued together by its sound, and be unique.”

Check out their album below and find out more about the band via our Five Questions With segment.

Hey Canadian Beats! We’re a Skeleton Club, a 3-piece band originating in Montreal. Childhood friends and founding members Chris Anglin and Andrew Matthews have been making music together for many years, but our project came to life once we relocated to Montreal from British Columbia and met our drummer (Morgan Zwicker) in 2017. Since then, we’ve been trying to push ourselves with each performance or release to bring something new to the table sonically, stylistically, or musically – the most recent result of this and the project we’re the proudest of so far is our debut album “Death, Love, & Money”.

Since we have such a diverse love of so many different musicians and styles our writing can depend a lot on what we’re feeling at the time. We’re okay with not having all of our material fit within a certain genre which is why some of our songs like “El Dorado” are spacey, moody, and textured while others like “Garbonzo” are driven by heavily compressed pounding drums and synths. Maybe we were listening to Leonard Cohen one night and XXXTentacion another. Despite the differences in sound and style among our songs, we try to unify them with lyrical content and themes.

Andrew and Chris both bring songs to the table independently for the band to develop. After a song structure is defined, the drums are recorded so that we can hear from an early stage how certain instrument choices and sound selections will shape the final product. For this record, we were fortunate to have a 6-month stay at a recording studio in rural Nova Scotia where we could take our time with recording the parts and completing the mixing – a dream come true for any musician.

We have no shows confirmed at the moment, but plenty of shows, showcases, and festivals being planned for spring/summer 2020. Be on the lookout for announcements on those dates and new material in the new year!

Playing our songs live is a different challenge from recording them. Chris is always juggling between his guitar, two synths, and his sampler. Morgan has electronic triggers hooked up to his acoustic drums to fill sonic space and emulate some of the big drum sounds on the record. There’s quite a bit going on for 3 people to cover so it keeps us on our toes!

We like to keep the energy high at our shows, and we feed off of the crowd. We love playing some of our slower and more straightforward songs like “That’s Fine” but when the moshing starts during “Wool of a Bat” we really come to life.

“Boogie Nights, Boogie Mornings”. We’re exploring a diversity of genres, sounds, and ideas in this song and are stoked with how it turned out!

We’re lucky to have tons of friends that are writing and performing music we love. NOBRO and Brain Flower are two of our favourites from Montréal and Wolf Castle is killing it in Eastern Canada!