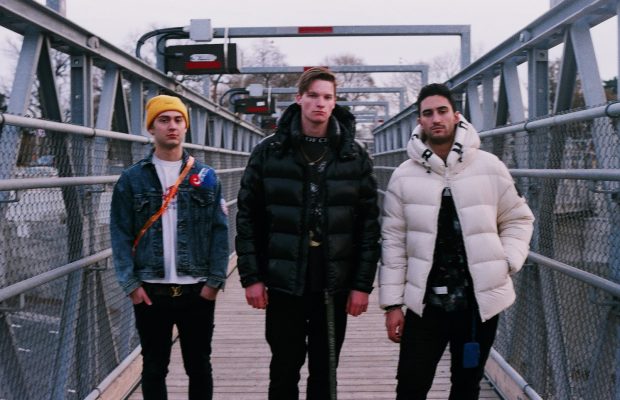 Toronto, ON-based alternative hip-hop trio, bloom is about to release their debut single, “no good thoughts” on January 3, 2020. The single begins with a bittersweet guitar line which forms the melodic and rhythmic backbone of the track.

“It’s about the constant struggle between thoughts that may be positive, negative, harmful, and self-depreciative. This struggle is due to past experiences (i.e. past relationships, friendships, traumatic events) and results in a crippling depression. As a result, in order to cope, relationships are torn, friendship circles begin to shrink and behaviour becomes reckless. It then becomes about self-realization and trying to change, with the goal of becoming better.”

Check out the teaser trailer for “no good thoughts” below and find out more about bloom in advance of the release.

Chris: I usually just write riffs either on my own or with the boys. Sometimes Jackson makes a beat and then I play riffs over it. I sing sometimes too, usually to lyrics that Jackson or Noah write but now I try to write too because I want to be cool as well.

Noah: I usually come up with lyrics on the spot and “freestyle” sing over new beats because I come up with my best stuff in the moment. Me and Jackson listen to his beats and usually come up with separate lyrics and feed off of each other and combine our lyrics so that we have all of our ideas on it. Our music is a very new sound, pop mixed with hip hop and edm but people can’t really put their finger on it.

Jackson: Our music is very different. I find we make a lot of different genres, but all the songs we end up wanting to release all fit within a similar niche. I think our sound is somewhere between alternative hip hop and electronic music. I have been producing music for over 5 years (4 years producing EDM) so making hip-hop beats is new for me, and a lot of my beats have an electronic influence.

As for writing songs, I don’t really know how to explain my process. I don’t know music theory, and I still don’t really even know what a hook is. All the songs I sing lyrics on are those which I write personally, and I don’t have a specific way I do it. I just kinda do it LOL.

Chris: No, but when we do they’ll be lit. Hopefully, sometime in May, we can have a Toronto show after our album releases in March.

Noah: Not at the moment but we should be having a local one in May after our self-titled album releasing in March.

Jackson: Negatory boss, except we have been talking about doing a show in Toronto a month or so after our first album in March releases. If enough people like it we’ll probably do one in May. It’s going to be exciting.