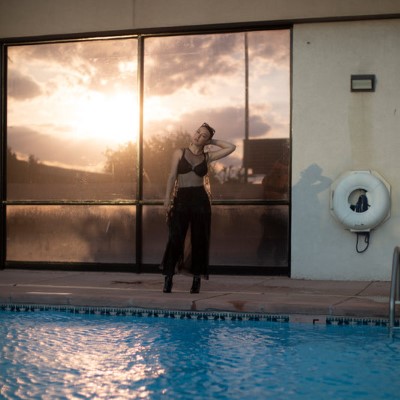 Toronto, ON-born Zoe Sky Jordan is an alternative singer-songwriter now based in Nashville. She has recently released her single, “Name On It” along with an accompanying music video. This is the third release from her upcoming EP, Scenes From Infinity which was produced by Liam Russell and mixed by Jason Hall.

“‘Name On It’ is about infidelity. A conversation between the singer and her paramour—one saying go back to your relationship, the other taunting them to stay in the affair. It conveys little snapshots that speak to important feelings from a certain stage in life—trust, mistrust, time passing, love, longing and acceptance. The lyrics are intentionally detached and tongue in cheek, starting in the middle of a scene to imply what just happened. For example the lyric, ‘I don’t need another friend, I’ve got a thousand and I barely care,’ start the song as if responding to the breakup trope ‘let’s just be friends.’”

The video was directed by Curtis Wayne Millard, and is about escapism. Inspired by the lyric, “tell me if your mind can’t change the scenery,” it flips between the majestic (a whimsical waterfall) and the mundane (a living room or convenience store.) The video conveys the heightened emotions and magical feeling of falling in love, through alluring, unexpected images. The hazy, fairy tail-like visuals, captured through wide shots and slow movements, complement the breathy vocals and deep, emotive lyrics of the song.

Check out the video below and find out more about Zoe via our Five Questions With segment.

I am an alternative singer-songwriter from Toronto based out of Nashville, TN. My parents are both songwriters —so I have been writing songs and performing live my whole life. I grew up listening to The Blue Nile, Ricki Lee Jones as well as 2000s indie rock like The Strokes and early Kings of Leon.

Tell us a bit about your music and writing style
Lyrics are the most important part of writing a song to me. I love to place images together that make you imagine what I’m imagining, rather than tell you a linear story. I often start from the middle of the scene and imply what just happened before. A lot of my lyrics are intentionally detached and tongue in cheek. That’s part of how I got the title for my upcoming EP “Scenes From Infinity”, which really just means “moments from everyday life”. The EP is all about the year after getting married.

My band is mostly a three-piece outfit these days. I play my groovy 90s Danelectro (that I got at Curry’s Gravenhurst, ON). Liam Russell is on electric bass, a deconstructed drum kit and a drum machine with some other odd bells and whistles and Jason Goforth plays a tricked out Pedal Steel and harmonica that are super ambient. Canadian tour dates with be announced this spring check my Instagram!!
If you were asked to suggest only one of your songs for someone to hear, which would it be?

So Jive is a fun one, but that’s a hard hard question.Canadian Beats is all about Canadian music, so who are your current favourite Canadian bands/ artists?
Well, Canadian artists are the best, – I love The Barr Brothers, Alvvays, Andy Shauf’s new stuff (and old stuff) is amazing. There are so many.
Connect with Zoe Sky Jordan:
Facebook
Instagram