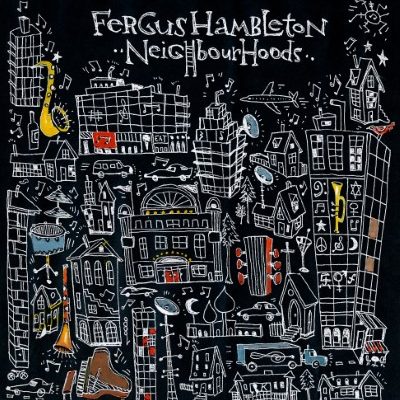 Toronto based singer-songwriter Fergus Hambleton has released his latest album Neighbourhoods. Hambleton is no stranger to Canadian music, complete with a resume that describes him as a “versatile singer, songwriter, composer and multi-instrumentalist [that] has been a leading member in the folk, pop and reggae fields since the early 1960’s.”

Hambleton has been a part of many different bands and orchestras over the years, including A Passing Fancy (a popular Yorkville band of the 60’s) and The Sattalites (for the past 35 years). Hambleton “earned a unique place in Canada’s rich musical tapestry as the core of the popular reggae band The Sattalites. The Sattalites have gone on to have a successful musical career peppered with numerous high-profile performances, 6 studio albums, two Juno Awards and a host of national and international awards and accolades.”

Being Hambleton’s first album since the release of 2015’s Written On The Wind, Hambleton creates a work of art through the use of musical sounds by combining folk and pop genres. Throughout the album, the additions of harmonized vocals and various wind and string instruments help to solidify his sound.

The album begins with a track called the “Late September Song”. This catchy tune has a bright and full sound. The addition of harmonies adds an interesting touch, as emphasis is placed on the line being sung by Humbleton (instead of the backing vocals), yet resembling a duet. This, along with the melody, gives an impression of ‘moving ahead’, almost as if you are traveling along a railway. Many other tracks on the album included backup singers to add to the harmonies. For example, “A Good Place To Be” includes harmonies that are more in the background instead of being a focal point. This reminds me of a song you’d see at the completion of a play, movie or some point as one is reminiscing about past events.

“Slow Fade Into Black” was released in July 2018. Capturing the attention of fans worldwide, this track was recorded at Kensington Sound in the iconic Kensington Market (Toronto, Ontario). This track has an interesting sound throughout, with the addition of sounds that seem to be made by chimes and a shaker. Overall, this song moves along at a slower pace, leaving an almost uneasy feeling.

“Lovers Lullaby” begins with a great guitar intro and makes great use of harmonies. The melody is in a different time signature than other tracks on the album, aiding to create a somber, almost peaceful feeling. The melody itself has a rocking, almost swinging feeling as if you are being rocked to sleep (bringing in the idea of a lullaby relating back to the title of the track).

The track “Walking in a Storm” leaves you feeling as if you are walking along a deserted area, with an unsettling feeling. The creative use of melodies and various sounds to give the unsettling impression. The addition of horns giving it a 70’s rockabilly feel. The saxophone towards the end of the song was unexpected but an attention-grabbing way to end the track.

One stand out from the album is “Life of My Own”. This track has a faster, more energetic sound that other tracks seem to be lacking (this is not a negative thing). The organ gives the track a huge sound, while the guitar and drums aid to create a sense of urgency. ‘Summertime Fun’ follows a similar path with the addition of guitar distortions that are not present in other tracks. Overall it is more of an upbeat, happy song; almost as if they are gearing up for the best summer of their lives.

The album ends with a track entitled “Pretty Peggy O”. Keeping to his roots, this track has a more traditional folk song sound. This track was more stripped down and simple allowing focus to be placed on the vocals. A nice, peaceful way to finish off the album.

With such an impressive resume, Hambleton has no intention of slowing down just yet. He is currently working on his next EP, along with performing in venues to share his music with the world. So keep an ear open, you never know when he may pop up in a location near you!