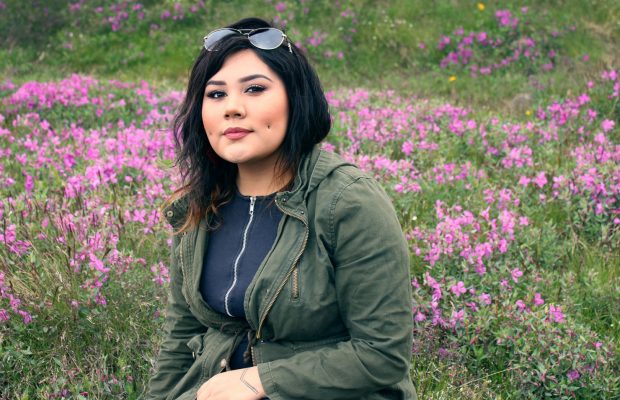 Indigenous Music Awards Best Album winner Angela Amarualik has released a video for her single, “Sapingillunga”, which means “I won’t give up”.

Amarualik certainly didn’t give up on her dreams that first sparked while taking part in Hitmakerz music education workshops that founder Thor Simonsen brings to Nunavut communities.  Ajungi, a compilation album to be released November 22 features Amarualik, Kelly Fraser, and Aasiva.

“I am forever grateful that Hitmakerz came to Igloolik to share their experiences and encouragement,” says Amarualik. “What they do is very important because there are not enough programs for youth in small communities.”

Amarualik and Simonsen wrote “Sapingillunga” together and the video was shot in Ottawa using an iPhone 8 directed and edited by Simonsen.

“The inspiration for the song was that I have been hurt, I will get hurt sometimes, but I’m still standing,” says Amarualik, “getting back up and trying again is what I do. Sapingillunga is for those who ever felt hopeless, or not enough.”

Check out the video for “Sapingillunga” below and find out more about Angela via our Five Questions With segment.

My name is Angela Amarualik, 20. I’m from Igloolik, Nunavut and I play Ukulele, throatsing, and sing in Inuktitut to preserve my language. I began writing songs when I was 16, sharing my voice and songs on social media. In 2017, Hitmakerz came to Igloolik to host workshops on songwriting and music production. I was one of the participants, and now I am an artist and instructor at Hitmakerz! It feels good to be able to be an inspiration for the next generation of Inuit artists.

My musical style is a mix between ancient Inuit melodies and throat-singing, and the pop music of my childhood heroes, Beatrice Deer and Hilary Duff. I mostly write about the things going on around me. Most of my music is in Inuktitut, which is very important to me.

Do you have any upcoming shows? For someone who has yet to see you live, how would you explain your live performances?

I recently completed a few shows on the Arctic Hitmakerz workshop tour. We performed in Resolute and Kimmirut. I have a performance coming up in Iqaluit sometime in February, but the dates are not certain.

I’m still working on developing my live show and travelling more outside of Nunavut. For now, I sing, throatsing, and play my ukulele to an instrumental track of my music. Sometimes I perform acapella.

I would suggest Upirnngaaq, which is a song about springtime in Nunavut. As northern people, spring is a very significant time, since we have 24-hour darkness during winter. I like spring because the sun gets warmer, little kids (finally) begin playing outside, families go fishing, and birds start chirping. Spring is festive to me, and the song is also my favourite to perform because it has a subtle throatsinging. It brings back a lot of memories, and I feel excited as if it’s spring!

Alanis Morissette would be one of many favourite Canadian artists, I recently found one of her songs – “Everything” – which was a childhood favourite. I clearly remember the music video. I also like Buffy Sante-Marie, Don Amero (who played guitar for me during my performance at the Indigenous Music Awards), and my good friend, Kelly Fraser, who is also an instructor on the Arctic Hitmakerz workshops. Kelly is one of the greatest people I know, her songs are powerful and important.