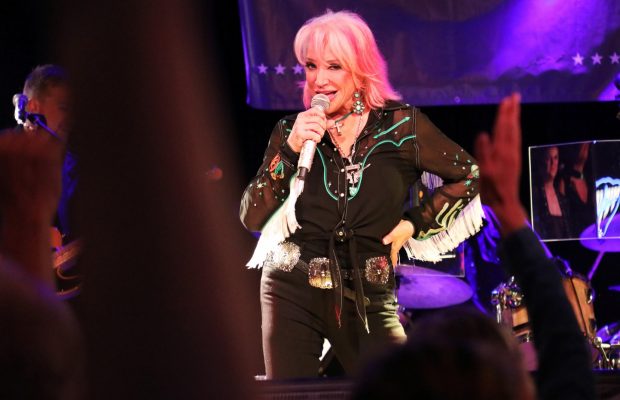 Tanya Tucker burst onto the country music scene at the age of 13 with her first hit single, “Delta Dawn.” Had Tucker decided to become a Girl Scout like most young girls her age, she would have probably earned herself every single possible badge three times over without batting an eyelash. Thankfully she wasn’t like most young girls her age and Tucker followed her heart and her dreams to Nashville, Tennessee and quickly became one of country music’s finest treasures. In September of 1974, Tucker graced the cover of the Rolling Stone magazine and was quoted saying “I’m Tanya Tucker. I’m 15. You’re Gonna Hear From Me.” Fast forward to today and for almost five decades now, Tucker has been consistently entertaining fans and recording great music ever since her debut.

On August 23, 2019, Tucker released the brand new studio album, While I’m Livin’. Produced by the multitalented Brandi Carlile and Shooter Jennings, While I’m Livin’ made its debut in the Top 10 on Billboard’s Top Country Albums chart (a first for Tucker), becoming Tucker’s tenth Top 10 Billboard Top Country Album throughout her career. Since the release of the album, Tucker has been on a whirlwind adventure of television appearances, promotional visits, and even kicked off another tour in support of the new record. While I’m Livin’ is a collection of brand new songs written just for Tucker and some of Tucker’s favorite tunes. The album has already produced four successful singles including; “The Wheels of Laredo,” “Hard Luck,”“The House That Built Me,” and my personal favorite “Bring My Flowers Now” which Tucker and Carlile debuted on April 1, 2019, at Loretta Lynn’s All-Star Birthday Celebration Concert at the Bridgestone Arena in Nashville. “Bring My Flowers Now” was also the inspiration for the album’s title While I’m Livin’.

With While I’m Livin’ out now, Tucker is on the road in support of her new musical masterpiece with the While I’m Livin’ Tour. With only a handful of Canadian dates this year including stops in Alberta, Tucker brought her tour the renowned Casino Rama stage on November 9, 2019. Located in Rama, Ontario Casino Rama helps bring some of the best world-class talents to Canada and allows us the opportunity to see many artists that don’t often get the chance to tour across Canada.

Tucker was in top shape as she hit the Casino Rama stage on Saturday night. Looking amazing, Tucker was decked out in a sleek white fringed jacket, black pants, and boots. Tucker was energetic, motivated, and armed with 90 minutes of complete smash hits and crowd-pleasers. A packed house of almost 5,000 fans cheered as she hit the stage performing her 1992 Top 10 hit, “Some Kind of Trouble.” Tucker takes to the stage with natural ease and comfort. Tucker kept the pace going strong with her hits “Hangin’ In,” “Ridin’ Out The Heartache,” “If Your Heart Ain’t Busy Tonight,” and an electric rendition of her 1975 Number One hit “Lizzie and the Rainman.”

Tucker captivated and entertained the crowd from start to finish. You could easily tell how much Tucker loves being on stage and how she feels the music while she is performing. Tucker danced, performed her signature moves, and interacted with the crowed extensively throughout the night. Expressing her love for her Canadian fans, Tucker made many mentions throughout the night of how loyal her Canadian fans were and how they helped make some of her biggest hits. With While I’m Livin’ hot off the presses, Tucker performed some new songs off the record and the audience loved every minute of the new music. Performing “Mustang Ridge,” “The Wheels of Laredo,” “I Don’t Owe You Anything,” “High Ridin’ Heroes,” “Hard Luck,” and an intimate performance of “Bring My Flowers Now” gave the fans a taste of what to expect of the new record.

Tucker frequently told stories throughout the show including her loves for her animals, explaining the heartfelt reason behind her pink hair, and even touching on her friendships with artists such as George Jones, Loretta Lynn, and even Merle Haggard as she took the time to perform his 1971 song “The Farmer’s Daughter.” Tucker was completely humbled by the audience, thanking them countless times for their support over the years. Tucker also performed many of her other career hits including; “San Antonio Stroll,” “Strong Enough to Bend,” “Love Me Like You Used To,” “Texas (When I Die),” “It’s A Little Too Late,” and an emotional performance of the 1992 hit song “Two Sparrows in a Hurricane.”

Closing the show, Tucker performed a verse of “Amazing Grace” acapella before launching into the song that started everything, “Delta Dawn.” The crowd was on their feet and did not want to see the show end. Taking the time to shake hands and even sign a few autographs on the sides of the stage before exiting shows us just how much of a class act that Tucker really is. With almost five decades under her belt, Tucker is still one of the best performers in country music and as humble and kind as I imagine her at 13. You can check out While I’m Livin’ now. The new album is available in physical and digital formats through all your favorite music services and retailers including special fan bundles on Tucker’s official website. Tucker will continue the While I’m Livin’ Tour through 2020 including a special stop at the Ryman Auditorium in Nashville, Tennessee on January 12, 2020, hopefully more Canadian dates to come next year.