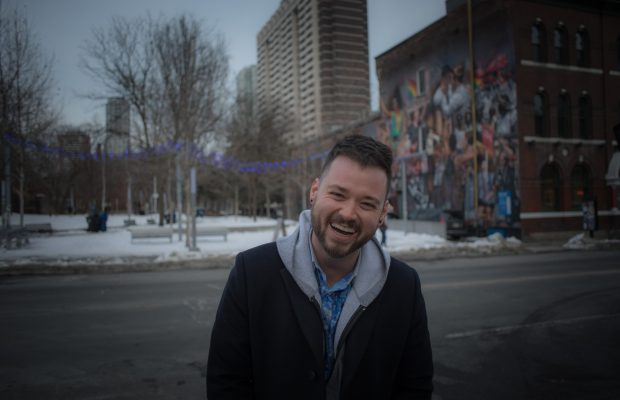 Toronto, ON-based alt. soul-popster Dylan Cohen has unveiled a visual ode to Toronto in the form of a music video for his single, “Alleyways”.

The visual ode to Cohen’s home base features crowd-sourced footage from Toronto residents, and proceeds from the launch party, which took place on November 6 at The Boat will be in support of The Laneway Project. The video was produced by members of the team behind JUNO Award-winning production house Route 11 (Grimes, Janelle Monáe, Sofi Tukker, Ria Mae) and Cohen’s classmates at the Harris Institute.

“I’ve always had a soft spot and fascination for Toronto’s laneways,” says Cohen. “It’s like the streets could be so busy and overwhelming, and then you and your friends could all hang a turn into an alleyway and have the space to yourselves.

The term became a metaphor in the song for ‘things that connect us all’ but are sometimes unseen.

Toronto is this living, breathing thing… It’s a product of all our dreams coming together to contribute to this crazy, colourful, beautiful, hopeful home for all. When that mixes together, and we all respect each other’s reasons for choosing to be here, something absolutely magical happens.

Cohen shares that he had first-hand experience on how the city can be a haven and foundation allowing people to thrive beyond their prior means.

“Toronto saved my life,” he says. “I moved here at 12 years old from a small town where I was bullied a lot for being gay.”

I started writing ‘Alleyways’ years and years ago and kept adding bits and pieces of life lived here as time went on,” Cohen says of the track. “I’d add sounds, textures, stories…The first line came to me while looking at the skyline of the financial district from a rooftop in Cabbagetown. ‘Town of the cabbage, now homes filled with riches, under the shadows, of the massive, financial district…’ It formed the foundation for writing a song about how much the city has transformed.”

The visual for “Alleyways” is the result of Cohen’s Harris Institute audio production class voting to create a video for the track. From there, Cohen (and the classmate crew) collaborated with friend Ryan Tremblay, co-founder of JUNO Award-winning video production studio Route 11 (Grimes, Janelle Monáe, Sofi Tukker, Ria Mae).

“Once the first cut was done, I knew the video needed more,” says Cohen. “It had me dancing and performing all over the city, but I wanted the video to represent not just my love for Toronto, but the wider Toronto community and my place in it.

I posted online that I wanted people to send me their cell phone footage of anything shot in Toronto. People sent me videos of them dancing at festivals, biking around with friends, filming out of subway windows, skateboarding… All sorts of stuff. When it came together, it was like a time-capsule of Toronto at this point in history.”

Check out the video below and stay up to date with Cohen via his socials.

Share this:
Related ItemsAlleywaysDylan CohenEric Alper PRontarioOntario MusicpopSoulToronto ON
← Previous Story The Beaches announce new single, “Want What You Got”
Next Story → Weekly Beat Down – November 11, 2019 to November 16, 2019