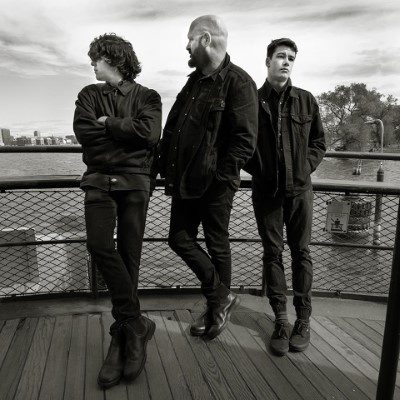 Orangeville, ON-based band, The Discarded is made up of Caden Jax (drums), Jared Dean (bass), and J.P (guitar/vocals). The three have been together for three years and have released 36 original songs, three full albums, and one EP, 2017’s self-titled release, 2018’s Manifesto, and March 2019’s Act 1, now they are finishing off 2019 with a November release, Sound Check and Fury.

Check out the release below and find out more about the band via our interview below.

Care to take a moment to introduce yourself to our readers?

Hi, we’re The Discarded and we hail from Orangeville, Ontario.  We are a three-piece rock and roll band with punk and garage rock influences.  We are Caden Wasson on drums, Jared Wasson on bass/keyboards and J.P. Wasson on guitar and vocals.  We formed in February of 2016 and this album is our third full-length release and is the complementary to our March 2019 EP release- Not from this town- Act 1

You have released your new album, Sound Check and Fury on November 7, what can you tell us about the writing process behind the album?

We wrote a three-act musical called Sound Check and Fury.  For that narrative, we wrote these 12 songs (act 2 and 3) that go with our 5 song EP we released in Match 2019 (Act 1- Not from this town).  All 17 of these songs were written over the proceeding 6 months to a year from the recording date of August 2018 with the exception of about five of the songs that came from an earlier period that fit into the overall narrative of the play.

The process with a lot of these songs were they were written together.  Either JP had an idea and brought it to practice where we expanded on it to it’s finished form.  Or the musical idea came about during a practice and then JP wrote the lyrics which cemented the arrangement of the song.  During recording, Ian Blurton also gave guidance and direction on a few of the arrangements to tighten them up.

Has your sound changed since the released of your previous releases?

Yes, greatly.  Caden was 13 when we started the band in 2016 and Jared 16, so they had only been playing for 6 months on the first self-titled recording.  By our second record, Manifesto released February of 2018 they had grown in their musical ability on their respective instruments.  That album has a very up-tempo, ’70’s punk rock feel to is- very dense in the overall sound.

This album we have gelled more as a unit or sound.  The songwriting is very collaborative now and the sound although still very inspired by punk and garage rock is more varied in sounds.  There’s more space in the guitar parts and sounds, the singing, tempos, and styles are far more varied across the album.

You are also set to tour throughout November and December, what can someone who has yet to see you live expect from your shows?

We play a very up-tempo show without stopping to chat too much between songs.  We like to bring a lot of energy and rock the joint- ha!

If you were to suggest only one song for a new listener to check out, which would it be?

Check out Looking Forward- it’s an up-tempo number but built over a very pop-oriented vocal line- it also shows the interplay between the three instruments in the band with a little frenzied feel to the drums and bass.  So it shows off the cool dynamic of the band in their instrumentation.  Lyrics are very positive.