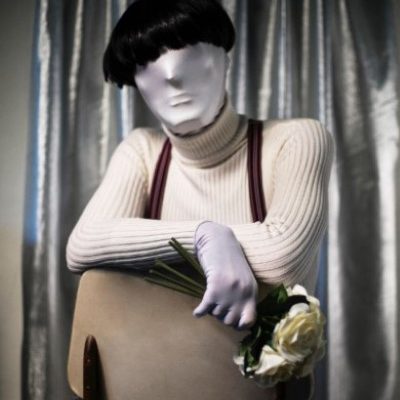 At the back of a small bar on Dundas street, people are just beginning to pour in. Huddled in warm coats and scarves, some linger at the bar whilst others make a beeline for the stage. Most everyone is here for, the one and only, Jonathan Bree. The masked musician is in Toronto tonight, the eve before Halloween and the buzz in the air is truly palpable.

Before Bree takes the stage we are treated to the musical stylings of Shilpa Ray, who with her harmonium and husky vocals lulls the room into a trance. Some time after Ray exits the stage, a masked musician clad in white comes on. However, this is not the infamous Bree but his bassist and guitarist instead. An identical figure comes on after him and settles at the drums. He is followed by two masked women who appear to look like life-size dolls. As his entourage settles on stage, the main man himself, Jonathan Bree appears. Similarly dressed in a zentai suit with a Beatles inspired wig, Bree sets himself apart from his clad-in-white band by donning a black shirt.

As the bass begins to bubble and the drums begin to pound, we are treated to “Sleepwalking”, the opening track on Bree’s third album of the same name. Much to the audience’s delight, the two life-size dolls begin a coordinated dance in time to the beat. The rest of the show passes like a dream. The New Zealand singer serenades the crowd, singing melodic songs about love and life. Strings and chimes play through the speakers, enveloping the audience in a moment that can only be described as truly surreal.

Under a kaleidoscope of moody blue and red hues, Bree and his female companions toss roses into the crowd. Near the end of his set, Bree croons the fan favourite, “You’re So Cool”. Completely stunned by this dreamlike performance, the audience is only just able to whisper along to“find solace in the privilege to pursue/ most people are crushed into servitude”.

Much to our disappointment, the show comes to an end and Bree’s spell is broken. As the band leaves the stage, the audience hardly moves – relishing in the moment of what has just been witnessed. Like a cult without its leader the audience shuffles out in a haze, Bree’s voice still ringing in their ears.